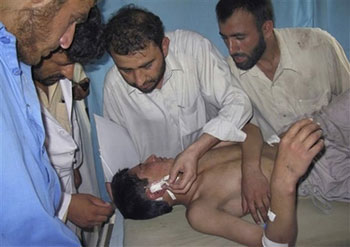 The UN mission in Afghanistan has expressed “strong concern” over the rising numbers of civilian casualties caused by aerial operations, as two separate air strikes over the weekend appear to have killed a total of 21 civilians.

Citing preliminary findings, the UN Assistance Mission in Afghanistan (UNAMA) on September 26 said that 12 women and children from the same family were killed when an “aerial ordnance” destroyed their house in Maidan Wardak Province, west of Kabul.

The incident took place late on September 23 in the village of Mullah Hafez, Jaghato district, during operations conducted by pro-government forces in the area, a statement said.

In a separate statement issued on September 25, UNAMA said it had received “multiple, credible allegations” that a September 22 air strike hit the house of a teacher in Kapisa Province, north of the capital, killing nine members of the same family.

Those killed included three women and four children, it said. Six other people were wounded.

UNAMA said it was unclear whether the two air strikes were carried out by Afghan or NATO forces.

Afghan Defense Ministry spokesman Mohammad Radmanish confirmed civilian casualties in Kapisa during a joint operation by Afghan and U.S. forces that involved air support and said an investigation was under way.

The U.S. military carried out an air strike in support of Afghan ground troops in Kapisa but killed “only militants,” said David Butler, a spokesman for U.S. forces in Afghanistan.

Afghan security forces have struggled to counter attacks from the Taliban and other militant groups since the withdrawal of most NATO combat troops in 2014.

UNAMA said it was currently reviewing reports of civilian casualties from “a number of alleged air strikes in other parts of the country.”

It also reiterated its call on all parties to the conflict to “take additional measures to prevent harm to the civilian population.”

About 7 percent of all civilian casualties in the Afghan conflict in the first half of 2018 were attributed to air operations, the UNAMA statement said.

The mission said it recorded a 52 percent increase in civilian casualties –149 deaths and 204 injured – from aerial attacks compared to the same period in 2017.