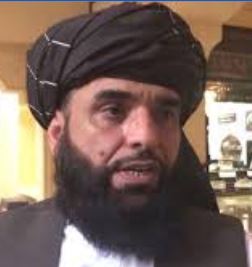 ISLAMABAD/KABUL – The Taliban said Tuesday talks on the formation of an “inclusive Islamic” government in Afghanistan are near conclusion as the radical movement consolidates its hold over the war-torn country.

The Taliban stunned the world over the weekend when they retook power in Kabul, the national capital, conquering almost all of the 34 Afghan provinces in just over a week’s time.

Their lightening battlefield advances were primarily the outcome of the largely unexpected surrender or retreat by U.S.-trained Afghan security forces in the face of Taliban attacks.

“In a few days there will be, of course, a transfer of power,” Shaheen told VOA by phone from the Qatari capital. “The deliberations and talks are underway to form an Afghan inclusive Islamic government. It will be announced soon,” he added.

The United States and the global community in general have vowed not to recognize any government in Kabul imposed by force, fearing Taliban-led rule would prolong the Afghan civil war and threaten human rights in the country.
Women’s rights are of particular concern, with U.N. Secretary-General Antonio Guterres on Monday calling on the Taliban to protect “the hard-won rights of Afghan women and girls.”

Analysts say that international legitimacy for any future government is crucial for ensuring that the strife-torn country continues to receive much-need assistance for Afghan reconstruction.

Shaheen said the Taliban are determined to arrange an inclusive governance system to address international concerns, reiterating his group does not believe in a monopoly of power.
“We believe that monopoly of power has not worked in the past. So, that’s why we want to have some Afghan fighters, politicians in the future government in order to have a durable peace in the country and open a new chapter of peace, co-existence and tolerance and reconstruction of Afghanistan,” he said.

Shaheen declined to clearly state whether Afghan women will be part of the future government.

“About women, we have announced already that they can have access to work and education by observing hijab. Today, you may have seen on (Afghan) TV stations women wearing hijab and doing their job,” he said.

Female news anchors broadcast news on Afghan mainstream television stations without interruption but covering their heads with a cloth or hijab.

Shaheen said the Taliban announced Tuesday a “general amnesty” for all, including government officials, and urged them to return to work.

Residents in Kabul said life was returning to normal in the city of more than six million as they ventured out of their homes.

A female journalist for the private Tolo News channel could be seen on the streets reporting on the latest situation but acknowledging there were a very few women seen in the markets. She said women feared the unknown.  A woman anchor was seen interviewing a Taliban official.

However, there were reports of incidents elsewhere in Afghanistan where women complained of harassment by the Taliban. Shaheen dismissed those reports as baseless, saying they were the work of “spoilers” to defame the Taliban.

In Kabul, a so-called Taliban complaint commission has been swiftly set up and officials there have been urging residents to reach out the commission with any complaints of harassment or violence so they can be addressed.

Taliban officials have also been visiting government offices and hospitals to assure staff there, women, not to worry and continue performing their duties as usual.

During their first stint in power – from 1996 until 2001 when they were ousted by the U.S.-led invasion in the wake of the September 11th attacks – the Taliban ruled Afghanistan with a strict interpretation of the Quran and Sharia law.

A swift whipping across the back of the legs by cadres from the ‘Ministry for the Propagation of Virtue and the Prevention of Vice’ was common for those tardy at prayer times.

Public floggings, amputations of limbs for thieves and even executions were scheduled for Fridays – sometimes held at the national stadium. And women were mostly barred from working or studying and forced to wear an all-covering burqa in public.

Two days after taking over the capital, the Taliban are patrolling the city in small convoys. “They don’t harass people but of course the people are scared,” a shopkeeper told AFP on condition of anonymity.

Meanwhile, evacuation flights resumed Tuesday at Kabul’s international airport after a chaotic day in which thousands of people gathered there as diplomats and civilians tried to leave Afghanistan in the wake of the Taliban takeover.

In another development, Amir Khan Muttaqi, a top Taliban leader and member of the group’s Doha-based political office, arrived in the Afghan capital, where his delegation held meetings with former president Hamid Karzai and Abdullah Abdullah, head of the Afghan National Reconciliation Council.

The discussions focused on security and governance-related issues; a Taliban official told VOA on condition of anonymity because he was not authorized to speak to media.

“We are in contact with the leaders of the respected Islamic Taliban movement,” Karzai said in a post-meeting joint video statement with Abdullah posted on the official Facebook page of the former president.

Some information for this report came from AFP.