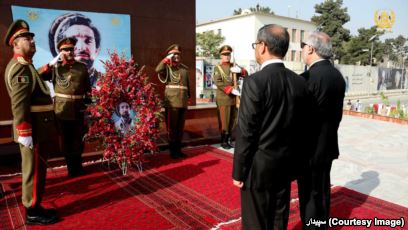 Masud led resistance to the Soviet occupation of Afghanistan in the 1980s and to Taliban rule from 1996-2001.

KABUL — A suicide bomber on a motorcycle has blown himself up near a procession in the Afghan capital commemorating the death of a revered resistance leader, killing at least seven people, officials say.

All the casualties were civilians, according to the Interior Ministry.

There was no immediate claim of responsibility for the latest deadly attack in the Afghan capital.

Hours earlier, Afghan security forces shot and killed a man they said was planning to blow himself up near supporters of Masud, who led resistance to the Soviet occupation of Afghanistan in the 1980s and to Taliban rule from 1996-2001.

Masud, an ethnic Tajik, was assassinated ahead of the September 11, 2001, attacks on the United States, and other late defenders of Afghanistan.

Before the September 9 blast rocked Kabul, gunfire could be heard across the city as demonstrators fired automatic weapons to commemorate the 17th anniversary of Masud’s death.

The September 9 blast came four days after a twin bomb attack at a Kabul wrestling club killed more than 20 people.

The extremist group Islamic State (IS) claimed responsibility for the bombings, which occurred in a predominately Shi’ite neighborhood.

Elsewhere in Afghanistan, officials said more than 20 members of the Afghan security forces were reported killed on September 9.

“Air strikes were called in and over 50 Taliban fighters were killed” in the fighting in Daimirdad district, he added.

In the western province of Herat, attackers targeted a checkpoint in Obe district, killing nine members of the security forces, according to provincial governor spokesman Jailani Farhad.

Five others were wounded in the attack that ended when reinforcements were sent to the scene, Farhad said, adding that 15 militants were also killed.

He added that reinforcements were being sent to the area.

The officials said the three attacks were carried out by the Taliban, though the militant group did not immediately comment on the assaults.

Afghan government forces have struggled to counter attacks from both the Taliban and the IS group since the withdrawal of most NATO combat troops in 2014.

The latest violence comes ahead of parliamentary elections next month and amid escalating tensions between ethnic groups in Afghanistan.

With reporting by AFP, Reuters, and AP