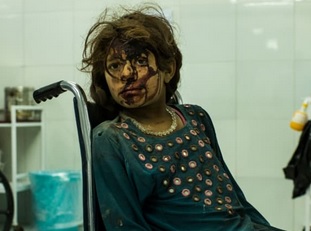 ISLAMABAD – An international charity says an average of five children have been killed or wounded every day in war-ravaged Afghanistan over the past 14 years.

Save the Children noted in its report Monday the South Asian nation is among the 11 most dangerous countries in the world for children.

“Between 2005 and 2019, at least 26,025 children have been killed or maimed in Afghanistan,” said the report released ahead of a donor conference in Geneva that will discuss humanitarian funding for the turmoil-hit country. The talks opened Monday.

The report found that more than 300 schools were attacked between 2017 and 2019, injuring or killing at least 410 Afghan students and children.

The charity has urged donor nations to increase funding for education, especially for girls, as well as protect the interests of people with disabilities and other vulnerable groups.

“Imagine living with the constant fear that today might be the day that your child is killed in a suicide attack or an airstrike,” said Chris Nyamandi, Save the Children’s country director in Afghanistan.

“This is the grim reality for tens of thousands of Afghan parents whose children have been killed or injured,” Nyamandi said.

The United Nations estimates 3.7 million children, almost half of all primary school-aged children, are out of school in Afghanistan. An estimated 60% of school-aged Afghan children missing out on their education are said to be girls.

“This week’s conference is a crucial moment for donor governments to reaffirm their support to Afghanistan and its millions of children, at a time when it is needed more than ever,” he stressed.

Violence has spiked in Afghanistan in recent months, killing and injuring dozens of combatants as well as civilians every day.

The hostilities come as the United States is withdrawing troops from the country under an agreement with Taliban insurgents amid at ending the 19-year-old Afghan war.

The pact opened first-ever direct peace talks between the Taliban and representatives of the Afghan government in September, but the process has stalled for the most part.

The International Committee of the Red Cross has also called for increased humanitarian assistance, saying the protracted war has all but decimated the health care system in Afghanistan, where millions need care more than ever.

“We welcome the peace negotiations as they offer an opportunity for Afghanistan and its people to end decades of conflict. However, since the start of the peace talks, we have seen hostilities intensify, with rising numbers of people wounded by weapons admitted to hospitals,” said ICRC President Peter Maurer as the two-day Afghanistan Conference began.

5 thoughts on “Report: Afghan War Killed or Maimed Over 26,000 Children”