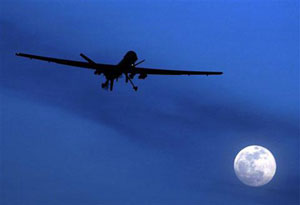 Nearly two dozen people have been killed in a fresh US drone strike in a restive district in northern Afghanistan, local sources say.

Provincial Afghan officials said on Monday that the strike in northern Kunduz province killed seven civilians who were being held by the Taliban militant group.

Sources say the victims, along with dozens of others, were abducted by the group on June 8, from a bus en route from Kabul to the northeastern province of Takhar.

Meanwhile, some reports said that the latest US aerial attack also claimed the lives of 14 Taliban militants.

Taliban militants are yet to comment on the fatal airstrike.

Abductions of people, including civilians and police forces, by Taliban regularly happen in Afghanistan.

The US spy agency, CIA, has used hundreds of unmanned aircraft to conduct surveillance flights and airstrikes since the US and its allies invaded Afghanistan in 2001. The CIA regularly uses drones for airstrikes and spying missions in Afghanistan as well as Pakistan’s northwestern tribal belt near the Afghan border.

Washington has also been conducting targeted killings through remotely-controlled armed drones in Somalia and Yemen.

The US claims the airstrikes target members of al-Qaeda and other militants, but according to local officials and witnesses, civilians have been the victims of the attacks in most cases.

The airstrikes, initiated by former US President George W. Bush, have been escalated since Barack Obama took office in 2009.

Obama has defended the use of the controversial drone attacks as “self-defense.”

« Kabul’s Peace Talks With Hekmatyar Deadlocked
Afghanistan: Who are the Hazaras? »