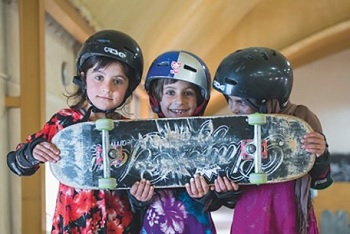 A film about girls skateboarding in conservative Afghanistan has won an Oscar for best documentary short at the Academy Awards.

Learning to Skateboard in a Warzone (If You’re a Girl) shows international charity Skateistan’s work in teaching young girls in Kabul how to skate on ramps and quarter pipes in Kabul amid militant attacks.

In her speech in Los Angeles on February 9, U.S. documentary filmmaker Carol Dysinger hailed the “brave girls” of Afghanistan, where few women are encouraged to participate in sport.

The teachers at Skateistan “teach girls courage to raise [their] hand, to say: ‘I am here, I have something to say, and I’m going to take that ramp — don’t try to stop me’,” Dysinger said.

Skateistan’s executive director Oliver Percovich told the AFP news agency that the “the story of a group of girls who are defying expectations” had gotten the recognition it deserved.

“We see so many negative stories about Afghanistan and this is a story of real hope which can help to challenge perceptions,” Percovich said.

Skateistan says it “empowers children through skateboarding and education” in Afghanistan, Cambodia, and South Africa.

The group runs programs in the Afghan capital and the northern city of Mazar-e Sharif.

Based on reporting by AFP