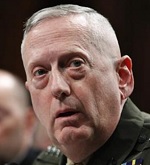 U.S. Secretary of Defense Jim Mattis says an inspector general’s report detailing as much as $28 million in overspending on uniforms for the Afghan National Army not only exposes waste, but also “serves as an example of a complacent mode of thinking.”

The Pentagon chief’s comments came in a memo released Monday in which he calls on his department to use the example as a push to expose wasteful practices.

“Buying uniforms for our Afghan partners, and doing so in a way that may have wasted tens of millions of taxpayer dollars over a ten-year period, must not be seen as inconsequential in the grand scheme of the department’s responsibilities and budget,” Mattis wrote.

The U.S. government has appropriated $117 billion since 2002 to pay for Afghanistan relief and reconstruction, with $66 billion of that money going to a fund to provide Afghan security forces with equipment and training and to conduct infrastructure repair and reconstruction.

In June, the Office of the Special Inspector General for Afghanistan Reconstruction (SIGAR) said that since 2007, the Department of Defense has paid for more than 1.3 million Afghan National Army (ANA) uniforms that feature a proprietary camouflage pattern. That pattern costs at least 40 percent more than comparable non-proprietary uniforms, and the difference in design added $26-28 million to the cost.

Going forward, SIGAR recommended — and the Pentagon supported — conducting a cost-benefit analysis of the pattern for the ANA uniforms, with SIGAR saying a change now could save U.S. taxpayers as much as $71 million over the next decade as support for Afghan forces continues.

Beyond the costs involved, the report also faulted the decision by the U.S.-led NATO coalition and the Afghan Ministry of Defense to select the proprietary forest camouflage pattern in a country where just about 2 percent of the land is forested.

“Our analysis found that DOD’s decision to procure ANA uniforms using a proprietary camouflage pattern was not based on an evaluation of its appropriateness for the Afghan environment,” wrote SIGAR chief John Sopko.

He is scheduled to be one of the witnesses Tuesday at a House Armed Services Committee hearing examining the Pentagon’s equipment and uniform purchases in Iraq and Afghanistan.

SIGAR said the goal of choosing a camouflage pattern for the ANA was to give the force a pattern that was “difficult to duplicate,” and which distinguished the soldiers from their allies and other branches of the Afghan security forces.

“Neither DOD nor the Afghan government knows whether the ANA uniform is appropriate to the Afghan environment, or whether it actually hinders their operations by providing a more clearly visible target to the enemy,” the report said.