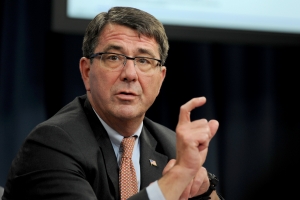 WARSAW, POLAND—U.S. troop numbers in Afghanistan are set to decrease by 1,400 at year’s end, but the Defense Department has not yet come up with a specific plan for trimming its force structure.

“We haven’t decided yet,” Secretary of Defense Ash Carter told reporters Thursday aboard a military plane en route from Washington to Warsaw.

President Barack Obama announced Wednesday that only 8,400 U.S. troops would remain in Afghanistan by January 2017 — more than the force of 5,500 men and women the president had originally determined would stay in Afghanistan, but a 15 percent cut in current troop levels.

According to Carter, events in Afghanistan over the past year taught the Defense Department it “would be better to have some additional forces” than the originally recommended 5,500 to carry out both categories of the U.S. military mission there.

More than 2,000 American troops in Afghanistan belong to a counterterrorism mission called “Freedom’s Sentinel,” rooting out al-Qaida and Islamic State extremists. Others are part of a “train, advise and assist” mission geared toward helping Afghan security forces better defend their country.

The decision on how to reduce troop levels — from the counterterrorism forces, from the train-and-assist team, or from both — will be an “ongoing process,” Carter said.

“It will be made according to need, in the normal way,” he said.

The defense secretary said an effort to “refresh” Afghan forces by scheduling additional training for Kabul’s troops last winter, between the country’s fighting “seasons,” had an important effect in Helmand province. He said he anticipated that a similar U.S. drive to “refit, retrain, [and] re-equip” Afghan forces could produce further benefits in the future.

The Afghanistan crisis is one of three major security issues confronting NATO at this year’s summit in the Polish capital. Afghanistan’s nearly 320,000 troops and police officers have struggled to control the Taliban after 14 years of war.