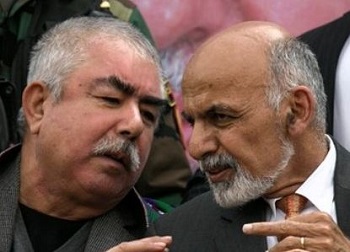 ISLAMABAD – A powerful Afghan warlord who was accused of kidnapping and raping a political rival, in addition to other accusations of rights abuses dating back decades, was promoted to the highest military rank of marshal Wednesday in a special ceremony in Jawzjan province.

The promotion of Abdul Rashid Dostum was part of a deal Abdullah Abdullah, the chairman of the High Council for National Reconciliation, negotiated with President Ashraf Ghani to end several months of political turmoil after Abdullah and Ghani declared victory in presidential elections last year.

The deadlock had threatened to unravel possible peace talks with the Taliban when the United States announced it would cut $1 billion in aid if the two sides did not come to a quick resolution.

Dostum, who had previously been a Ghani supporter, backed Abdullah for the presidency in 2019 in return for a promise of the promotion.

In 2016, while Dostum was serving as Ghani’s vice president, he was accused of kidnapping fellow Uzbek and political rival Ahmad Ishchi.

Ishchi broke down on national television as he accused Dostum of beating him up in front of thousands at a sports arena, torturing him, and ordering his guards to rape him with the barrels of their guns.

After an outcry and calls for justice, including from the United States and European Union, Ghani’s administration tried to have Dostum arrested, only to have the strongman flee to Turkey where he stayed for 15 months.

“Afghans who are counting on the government to protect human rights may be gravely disappointed,” she tweeted.

After receiving his rank, Dostum told a gathering the United States should not pull out of Afghanistan without making sure the Taliban implement their end of the bargain.

He was referring to a deal titled the “Agreement for Bringing Peace to Afghanistan,” reached in February, that calls for the withdrawal of U.S. forces from Afghanistan in 14 months in return for the Taliban breaking ties with al-Qaida and preventing the use of Afghan soil “against the security of the United States and its allies.”

Dostum also said he could defeat the Taliban in six months if the current Afghan government and the international community let him lead a war.

A large number of Afghan politicians, along with diplomats from Uzbekistan, Turkey and India, were joined by hundreds of locals at the ceremony. Dostum is the third person in Afghan history to have received the rank of marshal.