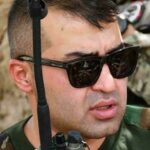 France24: Provincial cities in the north have fallen like dominoes this week – in some cases after government forces retreated or surrendered without a fight – but in Lashkar Gah, a Taliban heartland, the army appears to be providing stiffer resistance. Leading them is Sami Sadat, 36, the highest-ranking army officer in southern Afghanistan, in an intense fight in defence of a provincial capital the Taliban are desperate to seize. Click here to read more (external link).