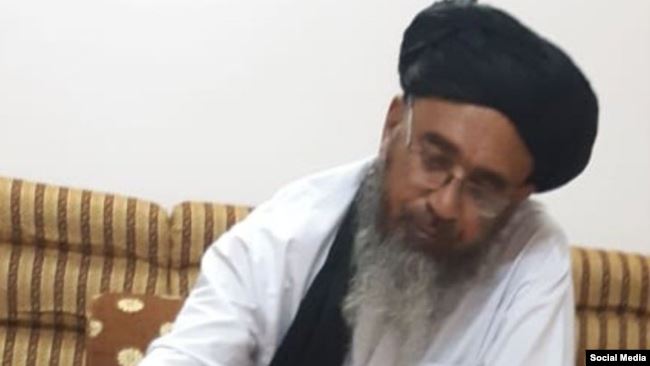 Abdul Hakim Ishaqzai, the Taliban’s new top negotiator, is reputed to be “a hard-liner dedicated to sustaining the jihad” until an Islamic emirate can be reestablished in Afghanistan.

Abdul Hakim Ishaqzai spent years lying low in Pakistan’s southwestern city of Quetta, where the Afghan Taliban leadership has been based since the U.S.-led invasion in 2001 toppled the extremist group from power in neighboring Afghanistan.

A hard-line cleric, Ishaqzai until recently ran an Islamic madrasah, or seminary, in the Ishaqabad area of Quetta, from where he led the Taliban’s judiciary and headed a powerful council of Taliban clerics that issued religious edicts to justify the group’s brutal insurgency in Afghanistan.

But now Ishaqzai, who is in his 50s, has been propelled into the spotlight after he was appointed the Taliban’s chief negotiator for long-awaited peace talks in the Gulf state of Qatar with the internationally recognized government in Kabul.

The announcement about Ishaqzai on September 5 was part of a major shakeup in the Taliban’s 21-member negotiation team ahead of the start of direct peace talks in Qatar between the warring Afghan sides.

The militant group offered no explanation for the sudden changes.

Taliban sources say the negotiating team was modified to give it the power to make decisions on the spot.

Experts say the appointment of Ishaqzai, who is close to Taliban leader Haibatullah Akhunzada, could be an attempt by the core leadership to reassert its direct control over the upcoming negotiations in Qatar.

The Taliban’s political office in the Qatari capital, Doha, is led by Mullah Abdul Ghani Baradar, a co-founder of the Taliban who is considered a relative moderate.

The ultraconservative Ishaqzai replaces Sher Mohammad Abbas Stanekzai, who along with Baradar spearheaded negotiations with the United States over a landmark agreement signed in February that is aimed at negotiating an end to the 19-year war in Afghanistan.

Under the U.S.-Taliban agreement, international forces should withdraw from Afghanistan by May 2021 in exchange for counterterrorism guarantees from the Taliban, which pledged to negotiate a permanent cease-fire and power-sharing deal with the Afghan government.

The deal pledged up to 5,000 Taliban prisoners would be set free by the Afghan government ahead of the negotiations, in return for the freedom of 1,000 members of the security forces held by the militants. The last Taliban prisoners were released last week, except for half a dozen inmates who were later transferred to Qatar.

Experts say Ishaqzai is widely respected among the Taliban for his religious credentials, ranking alongside Mullah Akhundzada as the most senior cleric in the militant group.

“This is important because the Taliban likes to assert religious justification for what they do,” said Michael Semple, an expert on the Taliban insurgency at Queen’s University in Belfast.

“Many of the senior commanders and leaders never actually qualified from their madrasahs and so are ‘unqualified,'” Semple added. “The presence of Ishaqzai adds weight to whatever the negotiating team cares to do.”

Ishaqzai graduated from and taught at the Darul Uloom Haqqania Islamic seminary in northwest Pakistan, which is known for preaching a fundamentalist brand of Islam and schooling a generation of fighters for the Afghan Taliban.

The so-called university of jihad counts some of the world’s most notorious terrorists among its alumni, including Taliban founder and spiritual leader Mullah Mohammad Omar — who died in 2013 in Pakistan — and Jalaluddin Haqqani, the late leader of the Pakistani-based Haqqani network that is allied with the Afghan Taliban.

Ishaqzai’s reputation among the Taliban is also enhanced by his birthplace. He hails from the Panjwai district in the southern Afghan province of Kandahar. The district is considered the spiritual home of the Taliban.

“This means that he represents the original leadership and core constituency of the Taliban — the clerics of the Pashtun tribes of the greater Kandahar region in Afghanistan,” said Semple.

The Taliban emerged in the mid-1990s following the end of the decade-long Soviet occupation of Afghanistan.

The predominantly ethnic Pashtun group first surfaced in ultraconservative Islamic seminaries in Pakistan, where millions of Afghans had fled as refugees.

The seminaries radicalized thousands of Afghans who joined the mujahedin, the U.S.-backed Islamist rebels who fought against the occupying Soviet forces.

The Taliban appeared in Kandahar in 1994, two years after the mujahedin seized power in the country. Infighting among mujahedin factions fueled a devastating civil war that killed around 100,000 people in Kabul alone.

The Taliban promised to restore security and enforced their ultraconservative brand of Islam. They captured Kabul in 1996 and two years later controlled some 90 percent of the country.

An Afghan intelligence official, who spoke on the condition of anonymity, said Mullah Akhundzada’s “complete trust in and closeness with” Ishaqzai was key to his appointment.

“The Taliban and the United States want to conclude negotiations before the U.S. election in November, and Ishaqzai is the one person who has the power to make decisions at the negotiating table,” the official said.

The official also said Ishaqzai’s appointment also “contains” the “serious tension” between political chief Mullah Baradar and Stanekzai, the former lead negotiator who has been demoted to deputy chief negotiator.

Both men remain members of the Taliban’s 21-member negotiating team.

Mullah Baradar served as the Taliban’s second-in-command under Mullah Omar and coordinated the group’s military operations in southern Afghanistan before his arrest in the Pakistani city of Karachi in 2010.

Some believe he was arrested by Pakistan, the group’s main sponsor, because he was facilitating secret talks between Kabul and the Taliban leadership.

But Stanekzai is “considered Pakistan’s man,” according to Antonio Giustozzi, a Taliban expert with the Royal United Services Institute in London.

Islamabad has long been accused of harboring and aiding the Taliban in Afghanistan.

Pakistan’s ties to the Taliban date back to the 1990s, when it provided arms, training, and intelligence to the militants. Islamabad was one of only three countries to recognize the Taliban regime as the government of Afghanistan. After the regime’s fall in 2001, many Taliban leaders took refuge inside Pakistan.

Observers say Pakistan sees the Taliban as an insurance policy for reaching its longstanding strategic goals in Afghanistan — installing a pro-Pakistan government in Kabul and limiting the influence of its archrival India, which has close ties to Kabul.

Ishaqzai has earned a reputation as a hard-liner and has been dedicated to restoring the group’s Islamic emirate, the official name of the Taliban regime that ruled Afghanistan from 1996 to 2001.

The presence of such a senior figure signals that the negotiation team has “real weight” and the Taliban is taking talks seriously, said Semple.

To those inside the Taliban who worry that the negotiating team might settle for a compromise deal, the appointment of a hard-liner signals “reassurance,” he said.

“However, those who believe that the Taliban might be persuaded to agree [to] a compromise will argue that the presence of such a senior figure makes it easier for the negotiating team to sell whatever they agree [to] to the rest of the group,” said Semple.

11 thoughts on “Why Did The Taliban Appoint A Hard-Line Chief Negotiator For Intra-Afghan Talks?”