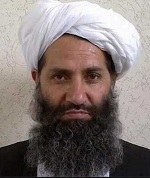 Taliban fighters captured major areas in quick succession on their way to seizing Afghanistan’s capital, Kabul, Sunday, 20 years after U.S.-led forces knocked the group from power. Here are some of its key leaders.

He is the Taliban’s supreme leader, a position he took following the death of his predecessor, Akhtar Mansour, in a 2016 U.S. drone strike.  He previously served as a senior judge in the court system during the Taliban’s earlier rule of Afghanistan.  After the 2001 U.S. invasion, he fled across the border into Pakistan.  His public profile has been limited, mainly consisting of the release of messages during Islamic holidays.

Baradar is the Taliban’s deputy chief for political affairs and one of the group’s co-founders. He also fled to Pakistan in 2001 and in 2010 he was arrested in the city of Karachi in a joint raid by the U.S. Central Intelligence Agency and Pakistani counterterrorism forces.

As the administration of former U.S. president Donald Trump pursued peace talks with the Taliban in 2018, it persuaded Pakistan to release Baradar.  He went on to oversee the group’s negotiation team during talks in Doha, Qatar, and met with then-U.S. Secretary of State Mike Pompeo in September 2020.

Baradar flew to the city of Kandahar on Tuesday, returning to Afghanistan for the first time in 20 years.

The son of Taliban founder Mullah Omar, who died in 2013, he oversees the group’s military operations and serves as a deputy leader.  Akhundzada appointed him to the post in May 2020.  He previously served as the head of the Taliban’s military commission for about half of Afghanistan’s provinces. A United Nations report in June said Yaqoob and another top leader, Sirajuddin Haqqani, “oppose peace talks and favor a military solution.”

He leads the Haqqani network, a militant group designated by the United States as a foreign terrorist organization in 2012 and one behind some of the deadliest attacks against U.S.-led coalition forces during the war.  Haqqani is the son of Haqqani network founder Jalaluddin Haqqani and serves as a deputy leader of the Taliban.

The U.S. Justice Department has offered a $10 million reward for information leading to Haqqani’s capture.

Hakim is a hardline cleric and close confidant of Akhundzada.  He led the Taliban’s negotiating team at the Doha peace talks and also headed the group’s own judicial system it enforced in areas it controlled in Afghanistan.

(Some information for this report came from the Associated Press, AFP and Reuters.)