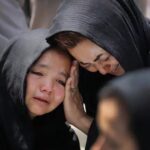 Asharq Al-Awsat: Eight months since it came to power, this hated government has not gained recognition by international community. The only weapon it has is to vicitimize itself, exaggerate the presence of terrorist groups in Afghanistan and use the name of ISIS to create terror amongst the Westerners.

Taliban has now created an imaginary group (which, in reality, consists of suicide bombers trained by themselves) which it introduces as ISIS so as to not take responsibility for murdering of innocent people.

Meanwhile, during a trip to Turkey, Taliban’s foreign minister claimed that ISIS’s reach was exaggerated and the terrorist group had no base in Afghanistan.

« Bombing At Mosque, Religious School In Northern Afghanistan Kills 33, Taliban Says
Legitimate defense and resistance is the only solution: Manawi »