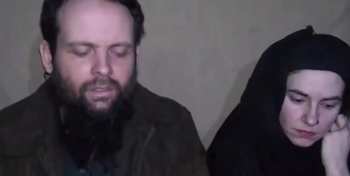 A kidnapped American-Canadian couple and their three children have returned to Canada, after enduring five years as captives of the Taliban-linked Haqqani network in Afghanistan.

The family landed in Toronto late Friday aboard an Air Canada flight from London.

Caitlan Coleman, a U.S. citizen, and her Canadian husband, Joshua Boyle, were kidnapped while backpacking in Afghanistan in 2012. Coleman was pregnant at the time. She gave birth to four children while in captivity.

Their release has prompted expressions of relief from U.S. and Canadian officials. In a statement, the Canadian government said it was “rejoicing over the long-awaited return” of the family.

“God has given me and my family unparalleled resilience and determination,” Boyle said in a statement reported by the Associated Press.

Before their arrival in Canada Friday, word of the birth of a fourth child had not been public. He said one of his surviving children is in poor health and had to be force fed by their Pakistani rescuers.

On Wednesday, acting on a tip from U.S. intelligence, Pakistani officials say their troops rescued the family, hours after their captors transported them in a car to the Pakistani side of the long porous Afghan border.

A U.S. plane was standing by at the military airbase in Islamabad, waiting to fly the family to a U.S. military base in Germany for a medical checkup, but Pakistani security sources told VOA Boyle refused to board the flight fearing their “scrutiny.”

Instead, the family boarded Pakistan’s state-run carrier and left for Britain where they took the Air Canada flight to Toronto.

The Afghan Taliban claimed responsibility for kidnapping the couple. U.S. officials maintain the couple was held in captivity by the Haqqani terrorist organization linked to the Taliban.

The insurgent group, which released two videos of the hostages while they were in captivity, had been demanding the release of their prisoners in exchange for Boyle and his wife.

One of the prisoners the militants wanted to be freed is Annas Haqqani, who is on death row in an Afghan prison. The detainee is the younger brother of Sirajuddin Haqqani, who heads the Haqqani network and also serves as a deputy to the leader of the Taliban.

A senior Taliban official when contacted by VOA claimed the Coleman and Boyle “converted to Islam” while in captivity.

“The Taliban need not have to keep them hostage and thought they be freed to go anywhere they wanted to because their hardships as an extended family were increasing in captivity,” the official said requesting anonymity.

U.S. and Pakistani officials have expressed hope the hostages’ release could represent a turning point in traditionally mistrusted-marred relations between the two countries and it could lead to better cooperation between the uneasy allies in fighting Taliban and other Islamist extremists in Afghanistan.

Ayaz Gul contributed to this report.