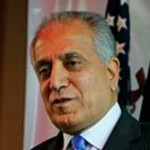 The U.S. special envoy for Afghanistan said U.S. aid to Afghanistan could be slashed if a Taliban-dominated government did not respect human rights, especially women’s rights.

Zalmay Khalilzad said on April 27 the United States could leverage hundreds of millions of dollars in U.S. aid to the country to pressure the Taliban to respect human rights.

“We have said that if [the Taliban] do want U.S. assistance, if they want international acceptance, they want to end their pariah status…those things will be all affected by how they treat their own citizens — first and foremost women of Afghanistan, children, and minorities,” Khalilzad said.

Khalilzad made the statement during a hearing of the Senate Foreign Relations Committee, whose members expressed concerns about human rights, emphasizing the rights of women and girls.

Khalilzad, who has overseen negotiations with the Taliban over the past several years, said he had personally made it “very clear that the issue of human rights, particularly women’s rights, is second to terrorism in terms of the hierarchy of U.S. policy importance.”

He also said Washington was pressing for women and minorities to be included in future peace talks.

Senator Bob Menendez (Democrat-New Jersey) and other members of the committee said they would oppose aid if the rights of Afghan women and girls are not protected after U.S. troops go home.

“I don’t believe under any circumstances that the United States Senate will support assistance for Afghanistan…if the Taliban has taken a governing role that ends civil society advances and rolls back women’s rights,” said Menendez, the chairman of the committee.

During the Taliban’s 1996-2001 rule, women were barred from education and work and were required to fully cover their bodies and faces. They also were barred from leaving home without a male relative and were subject to being stoned for committing “moral offenses.”

Senator Jeanne Shaheen (Democrat-New Hampshire) was skeptical about protection for women’s rights after the withdrawal of U.S. and NATO troops later this year. She said women in Afghanistan remain targets of violence, referring specifically to seven women who had been killed by the Taliban for advocating for human rights.

“I will not support any efforts that will allow them to continue to commit these horrific acts without any accountability,” Shaheen said.

The hearing was the first on the administration’s Afghanistan policy since President Joe Biden announced plans to withdraw the remaining 2,500 U.S. troops by September 11.

Biden made the announcement on April 14, saying that the United States would continue providing assistance to Afghan security forces and to civilian programs, including those for women and girls.

Secretary of State Antony Blinken has said that the Biden administration was working with Congress to provide nearly $300 million in civilian aid to Afghanistan.

In an interview on CNN on April 27, Blinken echoed Khalilzad’s sentiment about protections for women and girls.

“I can say very clearly and categorically that an Afghanistan that does not respect their rights, that does not sustain the gains we’ve made, will be a pariah,” he said.

With reporting by Reuters, AP, AFP, and CNN