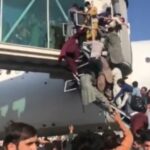 Tens of thousands of Afghans again jammed the roads leading to Kabul’s airport, as Taliban fighters fired weapons in the air and sought to control the crowds trying to flee the country.

As the Taliban tried to consolidate its control over Kabul and establish law and order, the group faced a challenge in a northern district from fighters who refuse to recognize the Taliban’s claim to power.

The Al-Arabiya TV channel on August 22 cited the son of Ahmad Shah Massud, who was one of the main leaders of the country’s anti-Soviet resistance in the 1980s, as saying he will not surrender areas under his control to the Taliban.

Ahmad Massud also called on the formation of a comprehensive government to rule the country with the participation of the Taliban. And he warned that war will be “unavoidable” if the insurgents refuse dialogue, the TV channel reported.

The chaos outside the Kabul airport has resulted in the deaths of seven Afghans, the British military said August 22 — a figure that is believed to be a major undercount. The British statement did not specify when or how exactly the deaths occurred.

A NATO official said that at least 20 people have died in the past seven days in and around the airport. Some were shot and others died in stampedes.

Thousands of U.S. Marines have secured part of the airport, and struggled to keep crowds at bay and away from the tarmac as military and civilian aircraft take off carrying foreigners and Afghans alike.

Jake Sullivan, the White House national-security adviser, told CNN on August 22 that 3,900 people had been flown out of Kabul on U.S. flights over the previous 24 hours. According to the U.S. Defense Department, U.S. planes have ferried 17,000 people out of the country since the evacuation effort began a week ago.

The British Defense Ministry said nearly 4,000 people had been evacuated on U.K. flights from Afghanistan since August 13.

The Afghan Civil Aviation Authority asked people not to travel to the facility.

“There [are] no civilian and commercial flights in Hamid Karzai International Airport,” it advised on its Facebook account August 21.

Britain, the United States, and other countries have struggled to expand evacuation efforts of their own citizens, as well as Afghans who have worked for foreign embassies, NGOs, NATO forces, or other organizations that might put them at risk of retribution by Taliban fighters.

Growing security threats have prompted U.S. military planes to do rapid, diving, combat landings at the Kabul airport and other aircraft have been seen shooting off flares on takeoff, apparently in an attempt to confuse possible heat-seeking missiles.

The U.S. Embassy issued a new security alert, warning citizens not to travel to the Kabul airport without individual instruction from a U.S. government representative.

The Pentagon said it was formally seeking airlift help from commercial airlines to relocate evacuees from Afghanistan once they have gotten out of their country.

Pentagon spokesman John Kirby said the commercial aircraft will not fly into the Kabul airport, but rather will be used to move passengers from way stations once they leave Kabul, allowing the U.S. military to focus on the Afghanistan portion of the evacuation.

The Spanish government announced that the United States and Spain have agreed to use two military bases in Spain to receive Afghans who worked for the U.S. government.

Under the agreement, the bases — one near Seville, the other near Cadiz — will be used to process refugees from Afghanistan until their travel to other countries is arranged.

European Union foreign policy chief Josep Borrell said the EU has “complained” to U.S. officials that their security at Kabul airport was overly strict and was hampering attempts by Afghans who worked for the Europeans to enter.

Bahrain has said it will open up its airports to flights evacuating people from Afghanistan, and the United Arab Emirates announced it would temporarily host Afghan refugees as the United States faced overcrowding at facilities processing evacuees in Qatar.

Afghan officials familiar with talks held in the capital say the Taliban will not make announcements on their government until the August 31 deadline for the U.S. troop withdrawal passes.

With reporting by Reuters, The Wall Street Journal, dpa, AP, and AFP

« Nikki Haley: US surrendered $85 billion worth of weapons to the Taliban
Vladimir Putin says he’s not allowing Afghan refugees into Russia »