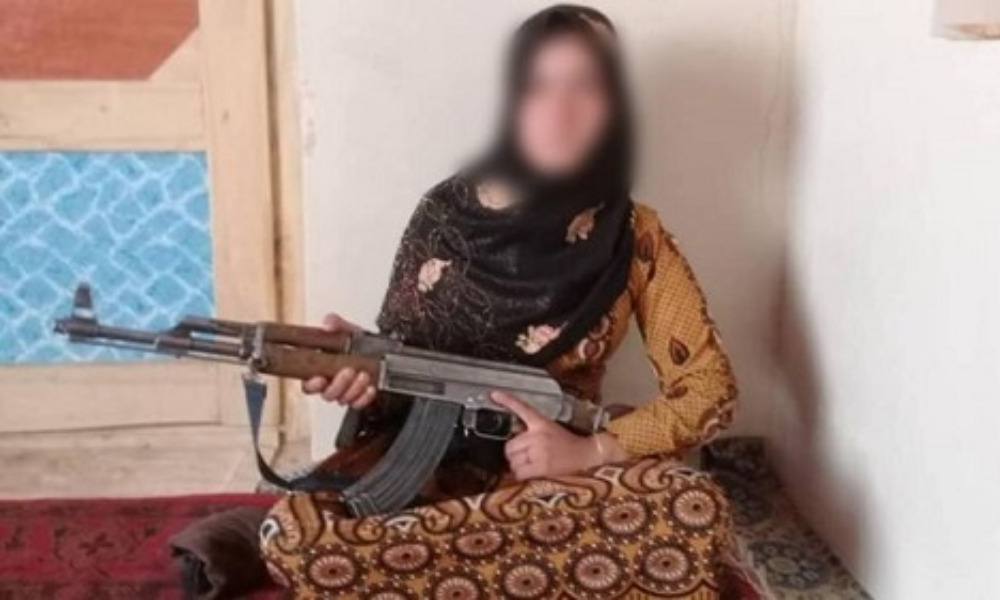 FIROZ KOH, Afghanistan — It was about 1 a.m. when a group of men banged on the front door of a mud-brick house in a village in central Afghanistan.

Startled, 15-year-old Qamar Gul jolted out of bed and grabbed her younger brother. Awakened in an adjacent room, her parents carefully approached the door.

It was the Taliban.

The militants ordered Gul’s mother and father to open the door. They refused.

A few minutes later, the group of armed fighters crashed through the door.

As her parents were being executed, Gul went and grabbed an AK-47 Kalashnikov rifle.

When the Taliban fighters tried to reenter the house, Gul opened fire on them, killing two militants and wounding another.

“I managed to kill two of them,” said Gul, adding that pro-government militiamen who had rushed to the area chased away the remaining Taliban fighters.

“I’m proud to have killed Taliban fighters,” said Gul, who along with her 12-year-old brother have been relocated by the provincial government to a safe house. “I killed my parents’ murderers. I will fight the Taliban until my last drop of blood.”

The incident occurred on July 16 in the Taywara district of Ghor Province, a mountainous and remote area in Afghanistan’s central highlands. It was only reported by the government on July 20.

The province is one of the most impoverished and unstable areas in the country. The provincial government’s power extends little beyond the capital, Firoz Koh.

Gul said her family was targeted by the Taliban because her father was a pro-government tribal elder.

The Taliban routinely kills Afghans they suspect of being sympathizers or informers for the government or security forces.

Gul called on the government to better protect civilians from such wanton attacks by the Taliban.

“We call on the president to ensure our security so that we can have a good life and future,” she said.

Mohammad Rafiq Alam, the district governor of Taywara, told RFE/RL that Gul and her brother were moved to the district center and would be transferred to Firoz Koh.

“We are proud of these two heroes,” said Alam. “They taught the attackers a lesson.”

Alam urged the government to award Gul the Malalai Medal, one of the country’s highest civilian honors.

“Qamar Gul is a female hero,” said Tariq Arian, a spokesman for the Interior Ministry, in a tweet on July 20. “The cabinet has praised the courage of Qamar Gul.”

Afghans have saluted Gul as a hero on social media. A photo of Gul, donning a head scarf and holding an AK-47 Kalashnikov rifle, has gone viral.

Taywara has been the scene of fierce clashes between Afghan security forces and the Taliban, which has overrun the district on several occasions.

The Taliban and dozens of illegal, armed groups run by former warlords and militia leaders are active in Ghor — a key transit route for shipments through Afghanistan of weapons and opium.

The Taliban continues to stage regular attacks across the country, despite signing an initial peace deal with the United States in February.

That agreement was intended to pave the way for direct talks between the militants and the Afghan government over a permanent cease-fire and a future power-sharing deal.

But those talks have stalled over the implementation of a major prisoner release.

Civilians — as is usually the case — are bearing the brunt of the escalating violence.

Afghanistan’s Independent Human Rights Commission said last week that in the past six months, 16 people have been killed or wounded every day in the country, on average.

According to the commission, 1,213 civilians have been killed and 1,744 others wounded in 880 security incidents during the first half of 2020.

7 thoughts on “This Afghan Girl Watched The Taliban Execute Her Parents. Then She Picked Up An AK-47 And Killed Two Militants Herself.”