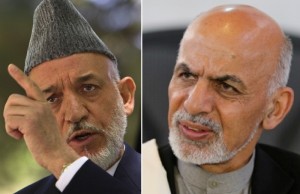 AP: The Taliban didn’t take the Afghan capital — they were invited, says the man who issued the invitation. In an Associated Press interview, former Afghan President Hamid Karzai offered some of the first insights into the secret and sudden departure of Afghan President Ashraf Ghani — and how he came to invite the Taliban into the city “to protect the population so that the country, the city doesn’t fall into chaos and the unwanted elements who would probably loot the country, loot shops.” Click here to read more (external link).