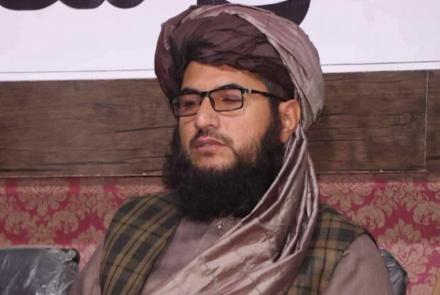 Since the Taliban returned to power in Afghanistan in August, information has trickled in about tensions building between the ethnic Uzbek, Turkmen, and Tajik communities in parts of northern Afghanistan and the mainly Pashtun Taliban fighters who have moved to the area in recent months.

The growing animosity between those ethnic groups and the Taliban ignited briefly in Faryab’s provincial capital of Maimana in mid-January when protests over the arrest of a local leader led to fighting.

An ethnic Uzbek, Alem was influential in working with local leaders and elders from ethnic groups in northern Afghanistan and securing the loyalty of those regions for the Taliban.

On January 12, Alem was summoned to Mazar-e Sharif, in Balkh Province, where he was arrested on suspicion of involvement in a kidnapping, reportedly by Taliban Deputy Defense Minister Mullah Fazel.

When word of Alem’s arrest reached Maimana the next day, a protest erupted with hundreds of mostly ethnic Uzbeks surrounding the security headquarters in the city and demanding Alem’s release.

Shooting started and at least four people were killed.

The protesters forced the Taliban fighters to surrender their weapons and they were then marched out of Maimana.

Alem’s deputy, Turkoghlu, said if the Taliban did not release Alem the Taliban flag would be lowered from the security headquarters building.

The Taliban reportedly sent reinforcements to the area, including a squad of suicide bombers, but after four days of negotiations the standoff ended.

While the protests were happening another prominent Taliban commander in the region — ethnic Tajik Qari Wakil — was invited to Mazar-e Sharif to mediate the dispute in Maimana.

Wakil was also arrested and Alem was taken to Kabul.

It is not clear what happened to Wakil.

Ataullah Omari, the commander of the Taliban’s 209th Al-Fatah Corps in northern Afghanistan, said outside forces were to blame for the unrest in Maimana without naming any specific group or country.

Omari claimed that “In the future, opportunists will not be allowed to create disputes among Uzbeks, Pashtuns, Tajiks, Turkmen, and others.”

Ghulam Nabi Ghafoori, the deputy head of the Ulema (Religious) council in Faryab, warned that “People have the right to politely and respectfully investigate the reason for the arrest of Mahmud Alem, but they are not allowed to demonstrate against the regime.”

Videos have been posted on social networks for many weeks showing ethnic Turkmen and Uzbeks in northern Afghanistan being forced from their homes by Pashtun nomads with the help of the Taliban after they gave the land they were on to their fighters and supporters.

The Taliban leadership remains predominantly Pashtun in its ethnic makeup and a lack of representation within the government seems to be one of the main complaints of ethnic groups in northern Afghanistan.

There is still armed resistance to the Taliban in parts of northern Afghanistan.

The guerrilla bands are believed to be part of the National Resistance Front (NRF), a group that emerged after the Taliban seized control over most of Afghanistan and is led by Ahmad Masud, the son of legendary Afghan field commander and leader Ahmad Shah Masud.

According to Azadi, there are no reports of fighting in the Panjshir Valley, the NFR stronghold before Taliban forces seized that area in fighting in September.

But northern Afghanistan remains restive nearly a half year after the Taliban chased the government from power.

The so-called Islamic State of Khorasan (ISK) has been active in northern Afghanistan, as well.

ISK claimed responsibility for a bombing at a Shi’ite mosque in Kunduz in October that killed more than 60 people.

Local officials from the previous Afghan government who now live abroad point to the Taliban’s theft of land and arrests of local ethnic commanders as proof the Pashtun-dominated Taliban will not treat ethnic groups as equals.

Many in northern Afghanistan seem to have similar concerns and, despite Taliban warnings about protests, there is no sign tensions in the region will ease anytime soon.