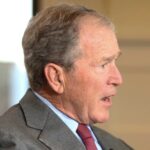 On Sunday, October 7, 2001, at 1:00 p.m. Eastern Time, George W. Bush in a nationally televised address told the American people the U.S. military had begun conducting airstrikes in Afghanistan in response to the 9/11 attacks.

The moment marked the beginning of “Operation Enduring Freedom,” as well as the “Global War on Terrorism (GWOT).”

“I gave Taliban leaders a series of clear and specific demands: Close terrorist training camps; hand over leaders of the al Qaeda network; and return all foreign nationals, including American citizens, unjustly detained in your country,” Bush said from behind a desk in the treaty room. “None of these demands were met.  And now the Taliban will pay a price.”

The military action, the president continued, represented “another front,” in the war against terrorism.

Bush said allies such as the UK, Canada, Australia, Germany and France had pledged forces as the military operation unfolded, while more than 40 countries in the region granted the coalition air transit or landing rights.

The day after the bombing The New York Post ran a classic headline with the words “TALI-BAM” and “America Strikes Back.”

The U.S. bombed the Kabul airport, the Taliban defense and interior ministries, and cut off the electricity supply. The coalition also struck Mazar-i-Sharif and Konduz in the north and Herat in the West.

Mullah Omar’s compound in the southern province of Kandahar was bombed along with terrorist training camps in Jalalabad in the east, among other Taliban and al-Qaeda targets.

Pentagon chief Don Rumsfeld told reporters in the afternoon that the “war against terrorism,” will use every element of American influence and power.

“The aim is to create conditions for sustained anti-terrorist and humanitarian relief efforts in Afghanistan,” Rumsfeld added.

Meanwhile, the very same day, al-Qaeda leader Osama Bin Laden – from an undisclosed mountainous locale – would release a video clip of his message.

“What America is tasting now is only a copy of what we have tasted… I swear to God that America will not live in peace before peace reigns in Palestine, and before all the army of infidels depart the land of Muhammad, peace be upon him,” Bin Laden said.

This sentiment, of course, contrasted sharply with America’s stated motives.

“The name of today’s military operation is Enduring Freedom,” Bush said during his October 7 address. “We defend not only our precious freedoms, but also the freedom of people everywhere to live and raise their children free from fear.”

The coalition would go on to topple the Taliban by mid-November, although the movement would re-emerge a few years later in the form of an insurgency that eventually defeated Western and Afghan forces, forcing a retreat of American troops, the final boot leaving the country last month.

According to the Brown University Costs of War project, over the past two decades the $2.4 trillion war killed at least 120,000 Afghans – including 46,000 civilians, 70,000 Afghan troops, and 53,000 opposition fighters. The conflict took the lives of over 6,000 American troops (regular and contractors combined) in addition to another 1,200 or so allied forces.

Today, exactly 20 years after the first bomb was dropped in the Afghan war, Bush’s threat to punish the Taliban rings like a hallow – albeit largely forgotten – echo through the corridors of history, in yet another example of the blinding power of American hubris.