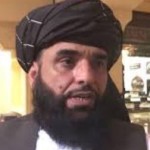 ISLAMABAD — Afghanistan’s Taliban on Thursday called for ending the travel ban on some of their leaders to help advance diplomacy, as the U.N. Security Council remains divided over whether to grant the exemption.

“[The] travel ban is tantamount to the closing of the door of engagement and talks. It is a hurdle in the way of resolving issues through peaceful means,” Suhail Shaheen, who heads the Taliban’s political office in Qatar, told VOA.

The waiver ended last Friday, though, after objections from Western nations to its automatic renewal, citing the Taliban’s failure to uphold their commitments that they would respect human rights of all Afghans, including women, form an inclusive government, and fight terrorism.

The United States and allied nations have proposed granting the travel waiver to a lower number of Taliban officials and limiting their travel only to Qatar, where U.S. officials have routinely held talks with Muttaqi-led Taliban delegates in recent months.

China and Russia, however, advocated allowing all 13 officials of the Islamist group, which seized power in Afghanistan a year ago, to continue to travel. Chinese officials have argued against linking human rights to travel issues, deeming it “counterproductive.”

“In this critical time, I hope it is dawned on all that it is a need for diplomacy and dialogue. It is worth mentioning that we greatly appreciate the efforts of all those who are supporting the travel ban waiver,” Shaheen told VOA.

Until Security Council members reach a deal, none of the Taliban officials on the sanctions list can travel abroad.

Despite the split over whether to extend the travel ban waiver, a U.S. State Department spokesperson in Washington stressed the need for engagements with the Taliban.

“The exemption expired on August 19, and discussions on whether to grant an exemption remain ongoing, and a decision requires consensus among other members of the Security Council,” said Vedant Patel.

“Generally, we see the need to continue limited engagement with the Taliban to help the Afghan people, and have found that face-to-face discussions in third countries have proven to be useful to advance our interests, to advance our national security interests,” Patel added.

In June, the Security Coucil’s Afghanistan Sanctions Committee had removed two Taliban education ministers from the exemption list to protest the continued ban on secondary school education for girls across most of the country.

Late last month, the United States announced the killing of al-Qaida leader Ayman al-Zawahiri in a drone strike against his safe house in the heart of Kabul. The presence of one of Washington’s most wanted men in the Afghan capital called into question the Taliban’s counterterrorism pledges.

Analysts say the Taliban’s reneging on their pledges is making it difficult for the U.S. and allied nations to push for an early release of billions of dollars in frozen Afghan central bank assets, held internationally.

“Unfortunately, the Taliban have not done anything to make it politically easier for the U.S. to unfreeze the assets, given the facts that they are still banning girls from going to secondary schools, that the leader of al-Qaida was found right in the middle of central Kabul,” said Barnet Rubin, a former senior advisor at the U.S. State Department.

“All of those things indicate that improving their relations with the outside world is not important priority for them,” Rubin told an online discussion this week on how to deal with the Afghan humanitarian crisis. China’s state television organized the event in partnership with an Afghan news channel.

Meanwhile, chief Taliban spokesman Zabihullah Mujahid reiterated Thursday they had not found the body of al-Zawahiri and investigations into the U.S. claims of the slain al-Qaida leader’s presence in Kabul were continuing.

Speaking at a news conference, Mujahid also demanded the U.S. stop flying drones over Afghanistan’s airspace in breach of their country’s sovereignty, saying the Taliban had taken up the issue with U.S. officials. “If they the U.S. government has any concerns they should share them with us,” the spokesman insisted.

The Taliban reaction came in response to reports that U.S. drones had been seen flying over southern Kandahar province and surrounding areas Wednesday.

« For Tehran, Afghanistan is a problem not an opportunity
Taliban says it has not found body of al Qaeda terrorist hit by US drone strike in Kabul »