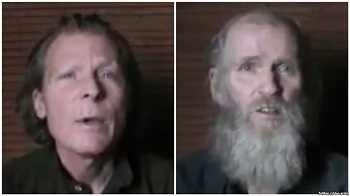 ISLAMABAD – The Taliban freed two Western hostages Tuesday after the Afghan government released three important Taliban prisoners, who were flown to Qatar where the Taliban has a political team.

Sources told VOA the hostages, American Kevin C. King, 63, and Australian Timothy J. Weeks, 50, were released in Zabul province in southern Afghanistan. A 48-hour ceasefire was in place in multiple districts in Zabul to help the process.

Taliban spokesman Zabiullah Mujahid confirmed that 10 Afghan soldiers were also released as part of the deal.

The three Taliban prisoners were flown from Kabul to Doha in a special Qatar government plane, according to sources in the Afghan government. A former Taliban ambassador currently based in Doha, Mawlawi Abdul Salam Zaeef, confirmed that the prisoners had arrived.

Another source said the prisoners were allowed to meet the Taliban political team in Doha Monday night.

Qatar has, for years, facilitated an unofficial Taliban political office in Doha, the capital of Qatar, in order to enable Western governments to negotiate with the group. Most direct talks between the U.S. and the Taliban have taken place there.

In a statement welcoming the release of the three prisoners, Mujahid thanked the emir of Qatar and the Qatari foreign minister for assisting the process. “These actions are a step forward in good-will and confidence building measures that can aid the peace process,” he said.

King and Weeks were kidnapped in Kabul in August 2016 as they were leaving the American University of Afghanistan where they taught.

“The AUAF community shares the relief of the families of Kevin and Timothy, and we look forward to providing all the support we can to Kevin and Tim and their families. We wish to extend our gratitude to all involved in the release of our colleagues,” the university said in a statement.

The Taliban prisoners included Anas Haqani, arrested in Bahrain in 2014 and reportedly handed over to Kabul by the United States. His older brother Sirajuddin Haqqani is the second-in-command in the Taliban hierarchy and heads the deadly Haqqani network blamed for many attacks on the U.S. and NATO forces.

Released with him were Hafiz Abdul Rashid, who was captured with Haqqani in Bahrain, and Haji Mali Khan.

President Ashraf Ghani announced last week that he had “conditionally” approved the prisoner swap to help reduce violence in the country and facilitate direct talks between Taliban and Afghan government.

In two separate phone calls with U.S. Secretary of State Mike Pompeo and Nation Security Advisor Robert O’Brien, Ghani reviewed how the swap would be implemented, according to his spokesman Sediq Sediqi.

“The U.S. officials reiterated their support for President Ghani’s decision and committed to work closely together to respond to any possible Taliban violence in the event the group don’t respond in good faith,” Sediqi tweeted.

The two sides also agreed that “a ceasefire and/or a reduction in violence was a necessary pre-condition for kick-starting the intra-Afghan negotiations to reach a political settlement,” according to State Department spokesperson Morgan Ortagus.

The intra-Afghan negotiations were expected to be the second step of a deal between the U.S. and Taliban that was considered nearly done and ready to be signed when it was abandoned by President Donald Trump in early September.

The U.S. peace envoy who led those negotiations, Zalmay Khalilzad, is also credited with leading the hostage negotiations with the Taliban. However, the hostage swap was delayed by days after two Taliban attacks soon after Ghani’s initial announcement.

Pakistan’s Prime Minister Imran Khan said on Twitter that his country had “facilitated” the release. In a trip to Washington in July, Khan had told Trump that his country was working to help get the hostages released and promised good news within 48 hours.