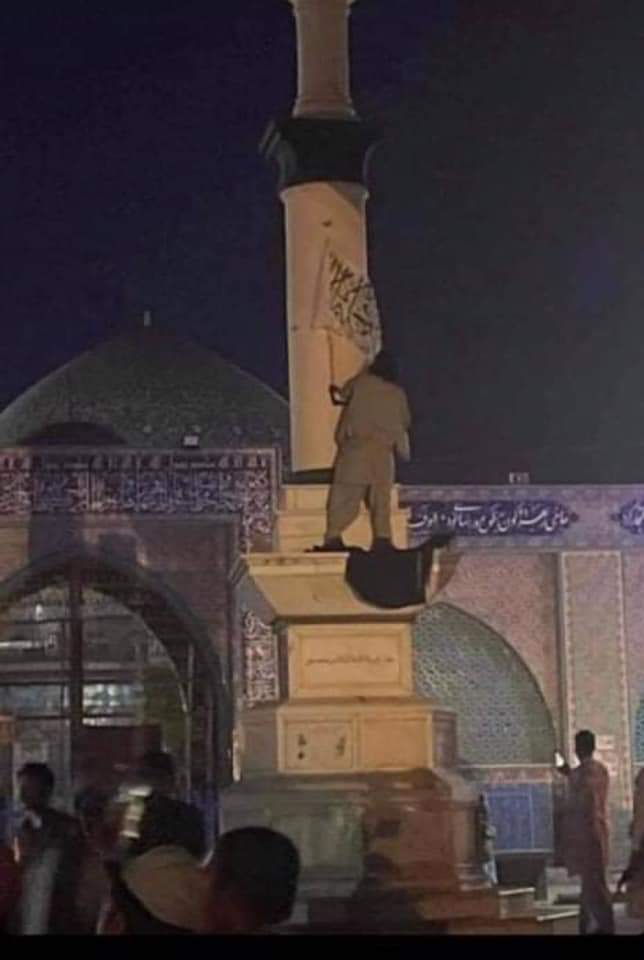 Taliban fighters have reportedly taken control of Mazar-e Sharif, a major northern Afghan city that is one of the last in the country still under government control.

The August 14 capture of the city, located around 100 kilometers from the border with Uzbekistan, was a major setback for the government.

Government forces have put up little-to-no resistance as Taliban fighters have swept across the country in recent weeks.

Earlier this week, the Taliban seized the country’s second- and third-largest cities, Herat and Kandahar, putting their forces within striking distance of the capital, Kabul.

Abas Ebrahimzada, a lawmaker from the Balkh Province where Mazar-e Sharif is located, told AP that the national army surrendered first. That prompted pro-government militias and other forces to lose morale and give up in the face of a Taliban onslaught, he said.

Afzal Hadid, head of the Balkh provincial council, said that security forces from the city were escaping towards the border. “The Taliban have taken control of Mazar-e Sharif,” he told Reuters. “All security forces have left Mazar city.”

Ebrahimzada also said Abdul Rashid Dostum and Ata Mohammad Noor, former warlords who command thousands of fighters, had fled the province and their whereabouts were unknown.

The Taliban have made major advances in recent days, and now control about 21 of Afghanistan’s 34 provinces. The advances have stunned U.S. officials who had hoped Afghan forces would hold their own against the offensive.

The advance comes as the United States continues to pull out its forces, ahead of a August 31 deadline announced by President Joe Biden.

Earlier on August 14, Afghan President Ashraf Ghani vowed not to give up the “achievements” of the last 20 years as the Taliban advanced.

In his brief televised address on August 14, Ghani said he was consulting with local leaders and international partners on the situation in the country. He did not announce his resignation, something that some observers had speculated was possible.

“As your president, my focus is on preventing further instability, violence and displacement of my people,” Ghani said, and that the “remobilization of armed forces is a top priority.”

Ghani had flown to Mazar-e Sharif — a city of some 500,000 — on August 11 to rally the city’s defenses, meeting with several militia commanders, including Abdul Rashid Dostum and Ata Mohammad Noor.

The fall of Mazar-e Sharif came amid news that Sharana, capital of the southeastern Paktika Province, had been overrun on August 14 by Taliban militants, local officials told Radio Azadi. Taliban fighters later captured Asadabad, the capital of the eastern Kunar Province as well.

The Taliban meanwhile released a video announcing the takeover of the main radio station in the southern city of Kandahar, renaming it the Voice of Sharia, or Islamic law.

In the video, an unnamed insurgent said all employees were present and would broadcast news, political analysis, and recitations of the Koran, the Islamic holy book. It appears the station will no longer play music.

The first Marines from a contingent of 3,000 have arrived in Kabul to help partially evacuate the U.S. Embassy and secure the city’s airport.

Pentagon spokesman John Kirby said that most of the 3,000 additional troops will be in place by August 15 and “will be able to move thousands per day” out of Afghanistan.

Kirby acknowledged on August 13 that it appeared Taliban fighters were trying to isolate the city, but said the capital was not “in an imminent threat environment.”

The Taliban’s rapid offensive has picked up pace as U.S.-led international troops aim to complete their withdrawal by August 31. The deadline was set after U.S. President Joe Biden announced in April that he was ending U.S. involvement in the war after nearly 20 years.

UN Secretary-General Antonio Guterres on August 13 expressed concern about the situation and urged the Taliban to halt their offensive and “negotiate in good faith.”

“The message from the international community to those on the warpath must be clear: seizing power through military force is a losing proposition. That can only lead to prolonged civil war or to the complete isolation of Afghanistan,” Guterres said.

Guterres also said he was “deeply disturbed” by accounts of poor treatment of women in areas seized by the Taliban.

“It is particularly horrifying and heartbreaking to see reports of the hard-won rights of Afghan girls and women being ripped away,” Guterres said.

With reporting by AFP, AP, BBC, and Reuters