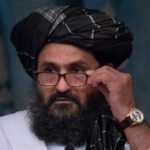 The Taliban is denying reports that the former head of their political office in Doha has been killed in a shoot-out with another senior Taliban figure during an argument over how to divide power in a Taliban-led caretaker government.

Taliban spokesman Suhail Shaheen says Mullah Abdul Ghani Baradar, the recently named deputy prime minister of the Taliban-led government, has “issued a voice message” rejecting “all those claims that he was injured or killed in a clash.”

“He says it is lies and totally baseless,” Shaheen said in a statement.

The Taliban also has released photos of a handwritten note claiming Baradar had recently left Kabul for Kandahar. But information being released by the Taliban has only served to fuel speculation about his fate.

Baradar has not been seen in public for several days. He was not part of a Taliban delegation that met in Kabul on September 12 with visiting Qatari Foreign Minister Sheikh Mohammed bin Abdulrahman al-Thani.

The Taliban has released video that it claims was taken of Baradar at a recent meeting in Afghanistan’s southern city of Kandahar. But the footage only shows the back of a man’s head. RFE/RL could not immediately verify the identity of the man shown.

The Taliban also has released photographs of Baradar that it claims were taken recently. But the dates those photographs were taken could not be independently confirmed.

Speculation over the fate of both senior Taliban figures has been bolstered by the circumstances surrounding the death of the movement’s founder, Mullah Mohammad Omar, in 2013.

That’s because the Taliban’s leadership council, the so-called Quetta Shura, continued to issue statements in Mullah Omar’s name for two years after his death.

The Taliban only confirmed Mullah Omar’s death after the internationally backed Afghan government in Kabul announced in 2015 that he had died.

That set off bitter disputes among the insurgency’s leadership — with recriminations between Baradar’s allies in the Quetta Shura and a Taliban faction further to the east that is dominated by the so-called Haqqani network.

It took a restructuring of the Taliban’s military chain of command after Mullah Omar’s death to keep the insurgency united.

But now, as the Taliban has been transforming its military command into a governing structure, alliances and tribal configurations that kept the rival factions together in recent years are being tested.

Afghan security experts are questioning whether the Taliban will be able to stay united to govern, or soon splinter into regional fiefdoms.

Just two weeks ago, Baradar had been seen as the likely head of the Taliban caretaker government.

He has been one of the movement’s most recognized faces in recent years because of his role heading the Taliban political office in Doha.

Baradar was one of three deputy Taliban leaders until last week, when the Taliban-led caretaker government was announced.

He was the only deputy leader of the insurgency who was not named to head a major ministry.

Sirajuddin Haqqani, the insurgency’s deputy leader who heads the Haqqani network and commanded all Taliban military operations in the eastern half of Afghanistan, was named as caretaker interior minister.

Mullah Yaqoob Omar, the son of Mullah Omar who headed the insurgency’s military operations in the western half of the country, was named caretaker defense minister.

The Afghanistan Analysts Network concluded from those appointments that Baradar lost out in internal Taliban disputes over the formation of the caretaker government.

Experts from the Afghanistan Analysts Network say Mullah Haibatullah’s absence from all public and private events, nearly a month after the Taliban seized Kabul, suggests that he may no longer be alive.

They note that even the reclusive Mullah Omar had made some public appearances when the Taliban ruled Afghanistan during the late 1990s — although not on video. Mullah Omar also had met with foreign officials and had given radio statements and interviews before he died.

For now, the Afghanistan Analysts Network concludes, Mullah Haibatullah “appears to function as a symbolic figurehead who can unify without actually appearing or speaking.”

But Masato Toriya, a specialist on the region from Tokyo University, says the threat of a civil war reigniting in Afghanistan now looks quite real.

Toriya says internal rifts within the Taliban are being exacerbated by the Taliban-led government’s complete lack of management experience and deteriorating living conditions across Afghanistan.

With reporting by Reuters, The Guardian, BBC, and TASS

« Ismail Khan: Taliban rule will not last, Panjshir resistance is expanding
In Afghanistan, the resistance begins »