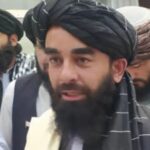 Tolo News: Zabiullah Mujahid, spokesman for the Islamic Emirate, said these people have been appointed to these positions based on an order by Mullah Hebatullah Akhundzada, the leader of the Taliban.  Based on a list which Mujahid posted on Twitter, Mawlawi Shahabuddin Delavar has been selected as the acting minister of mines and petroleum, and Mullah Mohammad Abbas Akhund has been named the acting minister of disaster management. Click here to read more (external link).