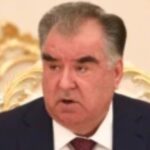 Tajik President Emomali Rahmon has called on the Taliban to form an inclusive government in neighboring Afghanistan with the participation of all political and ethnic groups in order to allay tensions in the war-torn country.

In a prerecorded video message to the UN General Assembly in New York on September 23, Rahmon reiterated his concerns over recent developments in Afghanistan, calling them a “serious threat to regional security and stability.”

The Taliban gained control over almost all of Afghanistan’s territory last month following a lightning offensive at the end of a 20-year U.S.-led military presence, triggering alarm among Central Asian states bordering Afghanistan over possible security threats emanating from the country and the potential for tens of thousands of refugees to pour over the border.

The militants have sought to reassure the international community that it poses no threat and suggested that it is now more moderate than during the brutal rule the hard-line Islamist group employed during its first stint in power from 1996 to 2001.

The Taliban promised inclusiveness and a general amnesty for former opponents but has been criticized for forming an all-male government led by hard-line veterans and composed almost entirely of members from the Pashtun ethnic group.

A ban on protests, a crackdown on demonstrators and journalists, and a rolling back of the rights of girls and women also failed to back up the group’s promises to respect human rights.

The international community has warned it would judge the group by its actions, and that recognition of a Taliban-led government would be linked to issues including the treatment of women and minorities.

Tajikistan is one of the few countries in the region that has rejected any talks with the Taliban.

In his address to the UN General Assembly, Rahmon accused the Taliban of not living up to its promises to form an inclusive government and criticized human rights groups for what he called their silence over “violation of the rights of other ethnic groups in Afghanistan.”

In Panjshir, a rugged mountain valley northeast of Kabul where an anti-Taliban resistance front is active, the Tajik president accused Taliban fighters of carrying out killings and depriving residents of access to food, electricity, and Internet connection.

Rahmon called for comprehensive talks with the participation of all segments of Afghan society as one of the main conditions for stability in the country.

Afghanistan’s ethnic Tajiks, who he said make up 46 percent of the country’s population, and other ethnic groups “have the right to have a worthy place in the affairs of state.”

While no reliable current data on ethnicity in Afghanistan exists to back up Rahmon’s claim, the group Minority Rights says previous estimates have shown ethnic Tajiks comprise about 27 percent of Afghanistan’s population, while ethnic Uzbeks are 9 percent and Turkmen 3 percent. The largest group, Pashtuns, are just over 40 percent of the populace.

The Tajik leader also expressed concern about what he called the strengthening of extremist groups such as the Islamic State and Al-Qaeda in Afghanistan, saying that the country “is on the verge of becoming a hotbed of international terrorism again.”

Describing Tajikistan as a “front line” in the fight against terrorism and extremism, Rahmon called for support from the international community.