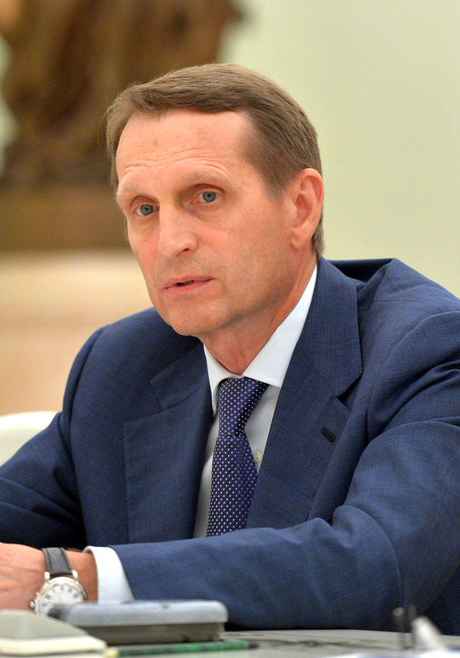 Several Central Asia states have evidence the United States is playing a “destructive” role in the region in the wake of the U.S. troop exit from Afghanistan, Russian Foreign Intelligence Service (SVR) Director Sergei Naryshkin said on Wednesday at a virtual meeting with counterparts from the Commonwealth of Independent States (CIS).

The development comes in sharp contrast to supposed recent cooperation between Moscow and Washington vis-à-vis Afghanistan and the war on terror.

The two countries were engaged in talks to potentially allow the U.S. to establish bases in the region to conduct “over the horizon,” counterterror operations to ensure groups like ISIS and al-Qaeda do not reconstitute to a significant extent and threaten the American homeland and other Western targets.

“We have accumulated a great deal of material saying that the United States of America plays a significant coordinating role in the destructive work against our countries,” Naryshkin said as quoted by Sputnik’s newswire service.

The United States and its allies want to destabilize the situation ahead of elections in a number of CIS countries, he added.

Russian President Vladimir Putin during the same event said it was important for the CIS countries to work together to counter threats from Afghanistan.

“We need to move on, increase the level of interaction in all key areas. Neutralization of potential threats from the territory of Afghanistan is of particular importance for ensuring the security of the CIS,” Putin said. “We all understand very well what impact events in this country can have on the state of affairs in Central Asia, in the Caucasus, and in other regions.”

The Russian president also said that after the final withdrawal of U.S. troops, power passed into the hands of the Taliban which have established “their own rules.” At the same time, he added, a number of international terrorist groups continue to operate inside Afghanistan.

Earlier this year, Putin reminded Russian officials at CSTO and SCO summits detailed emerging potential threats in Central Asia and the Transcaucasia, claiming that terrorists from Iraq and Syria were flooding the region.

Even formally and publicly speaking, U.S. and Russian officials in recent days and weeks have taken steps to normalize relations in an attempt to end a diplomatic row that has been ongoing over cyber-attack accusations, among other issues.

BACK TO THE FUTURE

Meanwhile, Pakistani Prime Minister Imran Khan earlier in the day suggested that Afghanistan will become the same hotbed for terrorists as it was in the 1990s if the West fails to list international sanctions on the Taliban.

The U.S. and its allies have been reluctant to recognize the Taliban government since the movement captured Kabul at the end of August, although representatives of both sides have engaged in diplomatic talks in Doha.

But Khan’s warning is quite foreboding as Washington – also- appears to want to roll back time in the region.

The strategy dates back to the 1970s when Carter administration security adviser Zbigniew Brzezinski proposed that an “arc of Islam” could be established around the Soviet Union, which of course went hand-in-hand with the plan to draw the Soviets into Afghanistan – the setting of the so-called “Bear Trap.”

Brzezinski even began a program to fuel religious fervor throughout Central Asia – including by flooding the region with Korans. And it was Brzezinski who famously said, looking back in hindsight, that the rise of al-Qaeda and the Taliban was a necessary by-product in order to fight the Soviets.

Former Indian Ambassador M.K. Bhadrakumar earlier this year predicted that the U.S. would try to use Islamic militants as tools to promote regime change across Central Asia as part of a strategy to block China’s Belt and Road initiative. Hence, he suggested Washington did not really want to defeat terrorism in Afghanistan.

The Biden administration as part of the justification of the force extraction claimed that the terrorist threat in Afghanistan had been degraded. Terrorism was a global phenomenon, U.S. officials had argued, and so will not be defeated by amassing resources in one country. A hypothesis that many experts believe makes sense.

The U.S. was publicly explicit about the fact that leaving Afghanistan would free up time and resources for Washington to focus on checking a rising China. However, what has not been publicly stated is the U.S. mission to undermine Afghanistan’s neighbors.

The American public has been wary of U.S. involvement in wars overseas because of the obvious backlashes in terms of blood that has been shed and resources wasted. Now, the U.S. public may have to brace themselves for backlash as the U.S. potentially ratchets its meddling in Central Asia reminiscent of the holy warriors they supported – in tandem with Islamabad – decades ago.