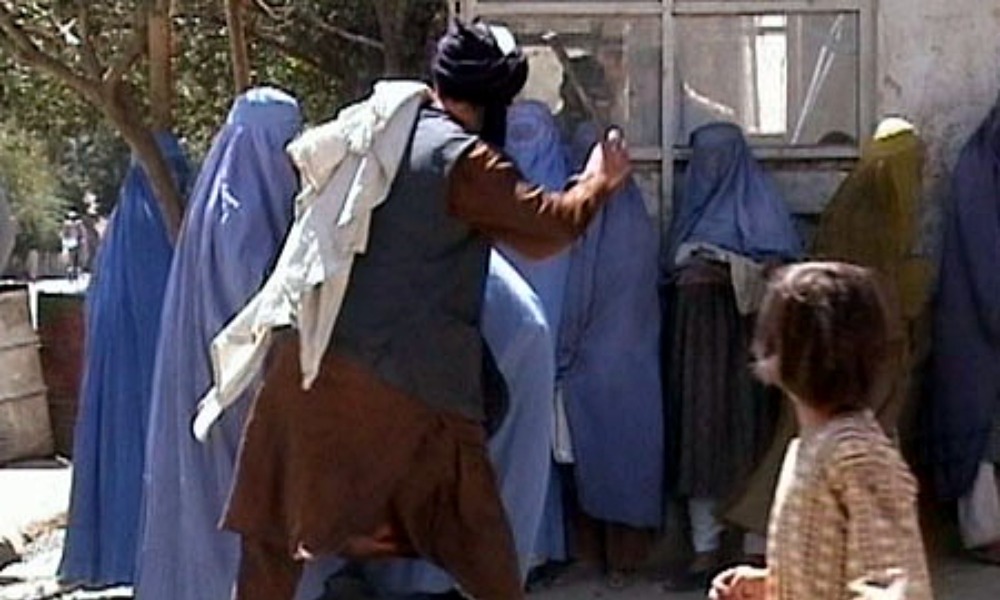 This was life for many Afghans under the Taliban’s brutal regime in the 1990s when the fundamentalist Islamist group conquered much of Afghanistan.

It is also the new harsh reality for the tens of thousands of Afghan women who live in areas recently captured by the Taliban, which has seized dozens of rural districts across the country since the start of the foreign military withdrawal on May 1.

Residents of Afghanistan’s northeastern countryside — the focus of the Taliban’s blistering military offensive — say the militant group has reimposed many of the repressive laws and retrograde policies that defined its 1996-2001 rule.

When it ruled Afghanistan, the Taliban forced women to cover themselves from head to toe, banned them from working outside the home, severely limited girls’ education, and required women to be accompanied by a male relative when they left their homes.

Many of those policies have returned in areas now under Taliban control, say residents. That is despite repeated claims by the Taliban that it has changed and that it would not bring back its notorious strictures.

“Before, I could go to the market alone to buy groceries,” says Monira, a 26-year-old woman from the Shirin Tagab district in the northwestern province of Faryab. “I could go to the hairdresser’s. I could wear my hair up.”

But that all changed when the Taliban captured her home district two weeks ago.

“Now, women are oppressed,” she adds. “The Taliban says we must be accompanied by a male escort if we leave home. We must cover ourselves.”

In parts of Faryab, the Taliban has banned shops from selling goods to unaccompanied women. Residents say those who break the rules are often punished, including public beatings, another feature of the former rule of the Taliban.

The militants have erected posters in some areas to inform residents of the new regulations. In other places, insurgents have driven around with loudspeakers and made announcements at mosques.

Sara, a 17-year-old student, says the Taliban shut down her school in the district of Aqcha, in the northern province of Jawzjan, after the militants captured it two weeks ago.

“We don’t know what will happen to us or our education,” says Sara, whose family fled to the provincial capital, Sheberghan, which is under government control.

“All those years that we studied, and all our efforts have been crushed,” she adds. “We can no longer go to Aqcha for fear of the Taliban. They say that girls should not go to school anymore.”

In other areas under Taliban control, education has been allowed for girls only until the fourth grade.

Arefa Navid, head of the Independent Human Rights Commission office in the northern province of Badakhshan, says the Taliban has warned women not to work outside their homes.

“The Taliban has told working women across Badakhshan that they cannot go to their offices under any condition,” Navid says.

Habiba Danesh, a parliamentarian from the northern province of Takhar, says the Taliban is also forcing single or widowed women there to marry its fighters. Similar unconfirmed reports have emerged from other provinces under the Islamists’ control.

Meanwhile, a male resident of the Balkh district of northern Balkh Province says the Taliban has banned men from trimming or shaving their beards.

Barbers have been threatened with punishment if they flaunt the new rules, he says, speaking on condition of anonymity for fear of reprisal by the Taliban.

Men, he says, have also been forced to pray five times a day.

Listening to music and watching television have also been barred in some areas, much like they were during the Taliban’s rule a quarter of a century ago.

“The Taliban has imposed many restrictions on people,” he says. “People are worried.”

Another resident says the militant group has ordered people to feed their fighters three times a day despite the desperate poverty in the area.

“They are forcing people to prepare food for them and offer them a place to sleep,” says the resident.

Human Rights Watch has also accused Taliban militants of forcibly displacing residents and burning their homes in apparent retaliation for cooperating with the Afghan government.

“The Taliban’s retaliatory attacks against civilians deemed to have supported the government are an ominous warning about the risk of future atrocities,” said Patricia Gossman, associate Asia director at Human Rights Watch.

The Taliban rejects charges that it is mistreating locals and imposing harsh new policies in the areas it recently seized.

“Currently there is a state of war and everything will remain the same [as it was under Afghan government control],” Taliban spokesman Zabihullah Mujahid told RFE/RL. “But once the laws are made the people will have to act according to the law.”

The Taliban claims it is not the same brutal group that first ruled Afghanistan in the 1990s, when its regime was an international pariah notorious for oppressing women and massacring ethnic and religious minorities.

In recent years, the Taliban has said it is committed to granting women their rights and allowing them to work and go to school if they do not violate Islamic or Afghan values. But it also suggested it wants to curtail the recent freedoms gained by women that it said promote “immorality” and “indecency.”

The Taliban’s adherence to ultraconservative Islam and the Pashtun tribal code has struck a chord with some currently living under the group’s thumb, especially in Afghanistan’s Pashtun-dominated rural south and east, which have borne the brunt of the war and where life has improved little in the past 20 years.

But those ideas are largely alien in the north and the major urban centers in Afghanistan that have made big social, economic, and democratic gains in the past 19 years since the Taliban was ousted from power.

The Taliban’s revival of its extremist policies in rural areas has filled many women in the cities with dread.

“I’m worried that women could return to the dark days of the past when we were just housewives and banned from taking part in society, culture, politics, and even sport,” says Sanam Sadat, an activist in Faryab’s provincial capital, Maimana, which is under government control.

“What happens when the Taliban takes over the cities?” she adds. ‘What will happen to women then?”

Written by Frud Bezhan and Mustafa Sarwar in Prague based on reporting by Radio Azadi correspondents in Afghanistan whose names are being withheld for security reasons.