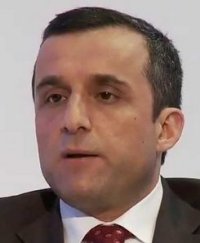 “Fighting is now going on in the Panjshir area,” the source said.

Ten thousand Afghan army personnel are currently being sent to the region under the leadership of General Abdul-Rashid Dostum.

The strategically important road through the Salang Tunnel passes through Charikar, which connects Kabul with Mazar-i-Sharif, the largest city in northern Afghanistan.

Earlier Saleh said that, unlike the fled President Ashraf Ghani, he remained in the country and, according to the Constitution, is the interim head of state.

Several weeks ago, against the background of the withdrawal of the American contingent from Afghanistan, the situation in the republic sharply deteriorated: the Taliban launched an offensive on large cities. On Sunday, they took complete control of Kabul and seized power in the country.

Taliban * political office spokesman Muhammad Naim said the 20-year war is over and a new form of government will soon become clear.

« The Taliban knocked on her door 3 times. The fourth time, they killed her
Beneath The Gloating, Taliban Takeover Brings Unwelcome New Uncertainty For Moscow »