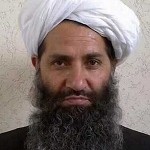 The reclusive leader of Afghanistan’s Taliban made a rare public appearance at a religious school in the city of Kandahar on October 30.

Taliban Supreme Leader Mawlawi Haibatullah Akhundzada had not been seen in public since he became the Taliban leader in 2016, even after the movement took control of Afghanistan in September.

During his visit to the Darul Uloom Haakimah madrasah, Akhundzada prayed for Taliban “martyrs” and asked God to “reward the oppressed people of Afghanistan who fought the infidels and the oppressors for 20 years.”

No video or photographs of the event, which took place under heavy security, have been released, but an audio recording of Akhundzada’s remarks has appeared on social media.

During his 10-minute address, Akhundzada prayed for officials undergoing the “big test” of building the “Islamic Emirate of Afghanistan.”

Akhundzada was a relatively low-profile religious figure in the Taliban before being named the movement’s leader following the death in a U.S. drone strike of his predecessor, Mullah Akhtar Mansour.

His public profile has been largely restricted to the regular release of messages to mark Islamic holidays.

His appearance in Kandahar has fueled speculation that he intends to take a more active role in running the country.