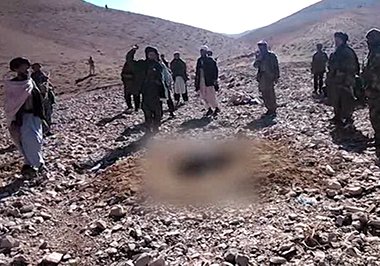 A return to lurid public executions and floggings is inevitable in Afghanistan as the Taliban transforms the country’s court system under its strict interpretation of Islamic law, an Afghan legal scholar says.

“We’re going to go back,” says Haroun Rahimi, an assistant law professor for the Kabul-based American University of Afghanistan. “Soon we will see floggings for adultery and public intoxication, and we will see them executing people for murder.”

“Those things will definitely happen,” says Rahimi, who sought refuge in Turkey after the Taliban seized control of Kabul last month. “Maybe it will not be with the fanfare that it had been done by the Taliban in the past — but it will be somewhat public.”

Rahimi bases his dire prediction on recent decisions by Taliban shadow courts and the way Taliban fighters have long used two key principles of Islamic law as a battlefield rally cry — the principles of “hudud” and “qisas.”

Under the Taliban’s strict interpretation of Shari’a, hudud punishments are fixed and mandated for those who commit “crimes against God,” Rahimi explains. Such crimes include adultery, drinking alcohol, highway robbery, and some types of theft.

Taliban courts also could issue rulings under a broader definition of hudud crimes that includes apostasy from Islam or rebellion against a lawful Islamic ruler.

Hudud crimes cannot be pardoned and the punishments must be carried out in public — from public flogging for drinking alcohol, amputating a person’s hand for theft, or penalties as harsh as stoning a person to death for adultery.

Rahimi notes that the high standards of evidence required in hudud cases means courts in most other countries under Islamic law rarely issue hudud punishments.

Courts in those countries have stipulated that hudud punishments should be avoided if there is the slightest doubt or ambiguity in a case.

By comparison, the Taliban regime that ruled from 1996 until 2001 carried out numerous public executions, amputations, and floggings at sports stadiums in Afghanistan.

Qisas is a form of retributive justice — “an eye for an eye” or “a just retaliation” — in cases of crimes against man.

Under qisas, a person convicted of murder is publicly executed at the request of the victim’s family.

A murder victim’s relatives also can choose under qisas to settle instead for “blood money” — a retribution payment from the killer.

The legal systems of Pakistan, Iran, Saudi Arabia, the United Arab Emirates, Qatar, and some parts of Nigeria provide for qisas with varying degrees of public display.

Rahimi tells RFE/RL there will be a lot of pressure on the Taliban from the international community to minimize public fanfare surrounding hudud and qisas punishments.

But he says there also is “a lot of pressure to publicize it for the domestic consumption of Taliban supporters and to mark the Taliban victory in terms of achieving their mission,” which was to establish their interpretation of Shari’a in Afghanistan.

“You also have to realize there is a verse in the Koran that says ‘take witnesses’ when there is a flogging. Do it publicly, not away from people’s eyes,” he adds.

“Flogging is going to happen because it is in the Koran,” Rahimi predicts. “There is an actual verse in the Koran referring to it. So if the Taliban want to say they’re not going to flog people, it would just be a different group. It would not be the Taliban, ideologically.”

“In the case of qisas — a person being tried and killed in retaliation for murder based on the request of the victim’s relatives — that’s also in the Koran,” Rahimi says. “The Koran actually describes this practice and says not to be light-hearted on such things. It says to do it. I don’t think the Taliban would show flexibility on that.”

Rahimi says that “given the unsophisticated and uncritical reading of Islamic texts by the Taliban,” he would be very surprised if they “engage sophisticated contextualization of those rules to reinterpret those verses” in a way that would go along with what most other Muslim countries practice.

The Taliban has rejected the judicial system of Afghanistan’s previous government as slow, corrupt, and unnecessarily large. But the Taliban won’t be creating a new court system from scratch.

Experts expect Afghanistan’s future judicial structure to be based on the shadow courts the Taliban established across the country during the past two decades — part of a Taliban strategy to undermine Afghan central government institutions.

Thus, Taliban trial courts were set up at the district level for both criminal and civil cases.

A second tier of provincial courts was created to hear appeals against shadow district court decisions. It also served as a trial court in areas where there were no Taliban district courts.

Finally, the Taliban set up a shadow Supreme Court in Pakistan with a mandate to hear appeals against decisions by the Taliban provincial judges.

Also known as Abdul Hakim Haqqani (or Abdul Hakim Saheb), the 64-year-old Hakim — who hails from the Maiwand district in Kandahar Province — was announced as the Taliban’s justice minister on September 7.

As a friend of the Taliban’s founder and first supreme leader, the late Mullah Mohammad Omar, Hakim played an important role in the creation of the Taliban.

He also headed the Taliban’s negotiating team in Doha and is a member of the Taliban leadership council, known as the Quetta Shura.

Rebel Rule Of Law, an ODI study published in May 2020, concluded that the shadow courts were an essential part of the Taliban’s strategy to build local support, legitimacy, and acceptance in the eyes of Afghans who had no other way to resolve a civil dispute.

The Taliban shadow courts often worked in isolated rural areas where the Afghan central government had no presence.

“Seizing on widespread dissatisfaction with the lack of access to justice in Afghanistan, Taliban courts quickly settled disputes that state and customary mechanisms could not,” the ODI concluded.

“Justice provision also enabled the Taliban to infiltrate new areas, soften the ground for future operations, and enforce a strict set of rules on the civilian population,” it said.

Ashley Jackson, co-director of the ODI’s Center for the Study of Armed Groups, conducted field research for the Rebel Rule Of Law study.

She interviewed hundreds of people who’ve been through the Taliban shadow courts in recent years, including Afghans in the western provinces of Herat and Faryab, the southern provinces of Helmand and Kandahar, and parts of eastern Afghanistan.

“There is some degree of variability on how the shadow courts work” in different parts of the country — especially for women and especially on more sensitive issues,” Jackson told RFE/RL.

Jackson says the Taliban courts in southeastern Afghanistan seemed to be more influenced by strong tribal structures there than in western part of the country.

She found that local Taliban commanders had “some influence” over Taliban court appointments in their territory.

But she rejects the notion that Taliban shadow court appointments were made by military commanders.

In eastern Afghanistan, she says, “the Haqqani network definitely doesn’t control the appointments of these local judges.”

“Of course, all of this is interlinked. But my understanding is that Taliban judicial appointments really do come from the Taliban Justice Commission — quite different from the military hierarchy,” Jackson says.

“Those on the Justice Commission had a guiding role in those appointments,” she says. “They tried to keep those civilian judges at the courts separate — a somewhat impartial individual.”

In fact, she says, appointed judges rarely came from the district or province where they are running a court.

They often were intentionally brought in from somewhere else so that they’ll be “impartial,” she says.

Taliban shadow courts have been sought out by Afghans to resolve civil disputes over land rights, inheritance, debts, and divorces.

Jackson says the “greatest asset” for Taliban shadow courts was their accessibility.

“It’s in this place where everyone knows about it,” she explains. “It meets on key days of the week. And people were able to access it and have a sense that it is relatively fair. They recognized the decision-making processes very fast.”

By comparison, Jackson says, the courts of the former Afghan government were “inaccessible, confusing, corrupt, slow — the opposite of all that. And the state courts just didn’t exist in a lot of places where there was consolidated Taliban control.”

Over time, Jackson says, the Taliban replaced the state courts in many areas or merged with customary dispute resolution mechanisms — such as local tribal councils, jirgas, and shuras.

Thus, even before the Taliban seized control of Kabul, the ODI concluded that “Taliban justice” was the only court system millions of Afghans had access to in order to resolve civil disputes.

In a study published in June 2020, Human Rights Watch (HRW) documented numerous abuses by the Taliban shadow courts — such as “prolonged arbitrary detention and summary punishments, including executions.”

HRW says the relatives of Afghan government workers were targeted for collective punishment in violation of international law.

Abducted government employees, or Afghans accused by the Taliban of being government spies, often were imprisoned indefinitely or summarily executed.

“Woman have sought out Taliban courts to settle inheritance and property disputes,” HRW says. “However, for women and girls who are victims of domestic violence, registering complaints through the Taliban courts does not offer even the limited possibility for justice that exists in government courts.”

Afghan women also have been deterred from fleeing abusive situations of domestic violence by the “brutal punishments” Taliban courts impose — such as flogging men and women for “so-called moral crimes,” HRW says.

Florian Weigand, a co-author of the ODI study, told RFE/RL he expects the Taliban will move forward with a judicial structure based on its shadow courts.

He says he expects they will now move their supreme court from Pakistan to Kabul or Kandahar “or wherever they decide to have their new capital.”

“Of course, there are all sorts of challenges the Taliban courts will be facing now by wanting to upscale the system based on the dimension of the territory and the number of people they want to govern — including urban areas like Kabul,” Weigand says.

“It’s going to be bureaucratically very difficult,” he says. “They need qualified judges. They need people to actually do justice. And they need to be able to pay these people.”

Rahimi agrees, saying: “from the little evidence we have about the things that are happening, it seems like the Taliban are happy with the court setup they have.”

But Rahimi says the Taliban also may have to set up some sort of special tribunal to deal with complicated commercial cases in order to build their credibility in the eyes of non-Afghans, the international community, and investors.

“When it gets to the more narrow issues of commercial and corporate law — the things they need to make the economy work better and have investors — they may come up with some kind of ad hoc or add-on features to their old system,” Rahimi says. “But they’re going to pretty much keep their old system.”