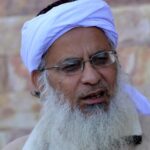 Police in Pakistan have opened a case against an influential cleric after he hoisted the Taliban flag over the building of an important religious seminary in the nation’s capital of Islamabad.

Maulana Abdul Aziz, a Taliban supporter who wants Pakistan to enforce Islamic Shari’a law in the country, raised the white-and-black flag of the militant group over the Jamia Hafsa religious seminary for female students last month after the Taliban took control of neighboring Afghanistan.

Aziz’s action underscores the strong support for the militant group within Pakistan, where media, religious parties, and even some government officials openly celebrated the Taliban takeover of Kabul in August.

The 58-year-old Aziz, who reportedly had links with the terrorist organization Al-Qaeda, served a two-year prison term after leading a rebellion at the Jamia Hafsa and Red Mosque in 2007 in which dozens of people, including his younger brother, were killed.

A police official at Abpara Police Station told Radio Mashaal on September 19 that they opened a case against Aziz a day earlier on charges of sedition and terrorism after he refused to remove the flags from atop Jamia Hafsa.

Aziz and his supporters blocked the police from entering the building to remove the flags, said the officer, who requested anonymity due to the sensitivity of the case.

The Office of the Deputy Commissioner Islamabad tweeted on September 18 that the flags had been removed from the building, that the area had been “cleared,” and the “case” had been “registered” against the cleric.

Dozens of police officers were deployed near the Red Mosque and Jamia Hafsa on September 19 to maintain peace in the area. None of Aziz’s followers have been detained, the official added.

Aziz sent an audio statement to media on September 18 saying that he removed the flags after authorities promised to reopen another mosque linked to the Jamia Hafsa and appoint a prayer leader and cleric.

That mosque has remained closed since the government’s 2007 offensive against the militants led by Aziz.

Authorities in Islamabad have “sealed” the case against Aziz for the time being, meaning that they will not take any legal action against him, a top administrative official told Radio Mashaal on September 19. The official did not give a reason for the decision to seal the case.

The influential cleric still has a very big following and, despite his attempted rebellion, the government did not remove him as head of Jamia Hafsa and the Red Mosque. However, the authorities did ban him from delivering sermons or from running the seminaries.

Aziz and his followers first hoisted the Afghan Taliban flag on the building of the seminary after the militant group took control of the country in mid-August but then removed it due to government pressure.

He hoisted the flag on September 17 again, prompting the police action a day later.

“We have worked for the establishment of an Islamic system” of governance in Pakistan before and “we will continue our efforts,” Aziz said in the statement.

Aziz was arrested in 2007 as he attempted to flee following his failed rebellion and later jailed. When he was released by the Supreme Court of Pakistan two years later, he was greeted by tens of thousands of his supporters.