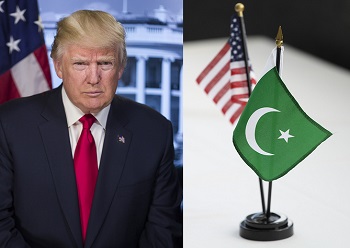 President Trump had some of the harshest words for Pakistan when he announced his new policy on Afghanistan and South Asia on August 21.

“We have been paying Pakistan billions and billions of dollars at the same time they are housing the very terrorists we are fighting,” he said in a speech.

Soon after, in an interview with an Afghan TV channel, the top U.S. military commander in Kabul, General Nicholson said the U.S. is “aware of the presence” of Taliban leaders in the Pakistani cities of Quetta and Peshawar, and that they should not “sleep in peace.”

Many observers in the region interpreted that to be a threat of either drone strikes or unilateral military action. The U.S. has carried out drone strikes periodically on Pakistan’s territory against high value targets. Last year, Afghan Taliban chief Mullah Akhtar Mansour was taken out in a drone strike in Pakistan’s Balochistan province.

Pakistan maintains that drone strikes on its territory are a violation of its sovereignty, but it has never shot down a U.S. drone.

While the resolution passed Wednesday did not directly call for such an action, it called on the government to “express the determination of the people of Pakistan to protect Pakistan’s sovereignty and territorial integrity.”

Other suggested responses included postponement of visits by U.S. delegations to Pakistan and vice versa, and suspension of Ground or Air Lines of Communication, the official name for the routes used by the U.S. or NATO to take their supplies through Pakistan to Afghanistan.

Some of these steps seem to already have been implemented. A visit by Pakistan’s Defense Minister Khwaja Muhammad Asif to the U.S. was postponed after Trump’s speech, followed by the postponement of a visit by the U.S. Assistant Secretary of State Alice Wells to Pakistan.

The National Assembly also objected to “attempts by the Trump administration to provide more space to India in Afghanistan,” a move Pakistan considers highly provocative.

Pakistani officials say India, a hostile neighbor to the east, wants to encircle their country by setting up a second front on the west in Afghanistan from where it could support terrorist activities or support separatist insurgencies inside Pakistan. Officials in the U.S. say Pakistan’s fears regarding India in Afghanistan are overblown.

The resolution, presented by Defense Minister Asif, also emphasized the “robust and credible command and control system” for the country’s nuclear weapons program in response to the second element of President Trump’s policy to “prevent nuclear weapons and materials from coming into the hands of terrorists.”

Pakistan’s Senate had adopted a similar resolution earlier in the day.