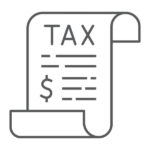 Afghans are struggling to make ends meet amid an economic crisis that has disrupted basic services, left them with rising costs and dim employment prospects, and battered the health and financial sectors. But the country’s Taliban leaders, limited to domestic revenue to fund its first annual budget, have found ways to squeeze citizens even more.

To fund a forecasted $2.6 billion budget that has impressed experts despite a projected $500 million deficit, the Taliban is relying heavily on its proven ability to collect taxes and on the increased export of valuable natural resources like coal.

The extremist group says it has cleaned up corruption in the collection of taxes and from the illegal mining and export of natural resources. It has also reactivated an e-filing system and suspended fines for late tax payments to help ensure citizens pay up.

“It’s a serious amount of money,” said William Byrd of the United States Institute Of Peace, noting that even if the projected budget falls short it shows the effort to collect revenue is “not really doing badly, compared to the economic situation, which is so dire.”

“I think in terms of running the government, it’s probably adequate,” he added, “if they spend it properly.”

Aside from saying that the funds will be generated from customs, taxes, and mining, however, the Taliban has yet to specify exactly where the money will come from or where it will be allocated.

There is one certainty: Afghans can expect to pay more taxes for everything from moving goods on highways to hanging a sign in front of a shop. But the Taliban government’s lack of transparency and the loss of essential services makes it difficult to see what citizens are getting in return.

Death, Taxes, And The Taliban

Foreign trade has fallen off dramatically since the Taliban took power in August, and the foreign aid that once propped up the Afghan economy has evaporated, leaving the Taliban to fund its government on its own.

Yet in announcing the Taliban’s first annual budget in May, Deputy Prime Minister Abdul Salam Hanafi foresaw revenue of 186.7 billion afghanis (around $2.1 billion), with other officials citing the elimination of corruption as a contributing factor.

“The entire budget, including spending on education, health, development, defense, and other sectors, will be funded by our national revenue sources without any foreign contributions,” Hanafi said, adding that the focus would be on providing education to children and that 27.9 billion afghanis ($330 million) would be spent on unidentified development projects.

Hanafi did not say how the expected deficit would be accounted for.

The previous, Western-backed government worked on a budget of around $6 billion in 2021 before the Taliban seized power. That budget forecast domestic revenue of 216.5 billion afghanis ($2.7 billion) but was hampered by the coronavirus pandemic and large military expenditures. Revenue would be more than matched ($3.3 billion) by foreign grants.

Like the Taliban’s budget, most of the domestic revenue came from customs and taxes, with most of the operating budget used to pay government wages and salaries and 35 percent going toward infrastructure, agriculture, and health.

But since the Taliban regained power, government employees have reported difficulties getting paid, food and fuel prices have soared, and the education and health-care systems are in shambles. As the militant group introduces, enforces, and increases levies across the board, Afghans say they are getting next to nothing back and have called for relief.

This month, the Taliban announced new tariffs on freight traffic that it says will pump 30 billion afghanis ($341 million) into the treasury. But drivers who spoke to RFE/RL’s Radio Azadi say efforts to raise more money from drivers have already been set in motion.

Omid, who frequently drives his passenger car on the Kabul-Jalalabad highway to deliver textiles, said a trip that used to cost him 70 afghanis ($0.80) in goods and road tariffs now costs nearly three times that amount, which in combination with higher fuel costs has put a huge dent in his earnings.

In Kabul, shopkeepers have complained that local authorities are enforcing a signage tax that used to be ignored.

Mohammadullah, who owns a grocery store in the capital, said that an official arrived at his store, “measured the size of my sign, and demanded 12,000 afghanis per square meter,” saying the law had been in effect since 2017.

Other Afghans have complained that an unpopular tax on phone cards that was determined to be illegal under the previous government is still being enforced despite spotty coverage.

Masud, a Kabul resident who works for a government agency, told Radio Azadi that even as he waits for his salary he is being charged a 10 percent tax to add credit to his mobile phone. “I have not been paid for three months now. I wonder how I can pay for rent,” he said. “The government has to solve the issue of taxing phone cards because we cannot afford it now.”

The situation has gotten so bad for the country’s media, which has already seen the closure of hundreds of outlets due to economic pressures and a Taliban crackdown on dissent, they have called for a tax exemption to help them stay afloat.

Even as the Taliban authorities have pledged to find ways to lower rising heating costs and provide more electricity to industries and large cities, they are boosting exports of a crucial natural resource needed for those efforts — coal — to help feed the budget.

The Taliban announced in late May that it was stepping up coal exports to neighboring Pakistan as it aimed to generate more revenue from Afghanistan’s mining sector and capitalize on record prices for coal. Global supplies have fallen due to Russia’s war against Ukraine and top exporter Indonesia’s ban on exports.

The Taliban has reportedly collected more than $33 million in customs revenue in the last six months and boosted coal exports to 1.8 million tons in the past year, a rise of 16 percent.

To further boost the budget, the Taliban last month reportedly increased its taxes on coal exports from 20 percent to 30 percent.

Most of the coal is being exported to Pakistan and is coming mainly from 17 mines across Afghanistan, according to Esmatullah Burhan, the spokesman for the Taliban’s Ministry of Mines and Petroleum.

Most of the coal is taken from artisanal mines that have traditionally been seen as a major source of corruption and infighting, and have drawn criticism for the use of child labor. “We allow each company to extract 2 tons of coal per day and they export it to Pakistan,” Burhan said. “We export about 10 to 15 tons of coal daily.”

Byrd of the United States Institute Of Peace, who has served as the World Bank’s country manager for Afghanistan and later as an economic adviser, says that Afghanistan’s coal resources are of a higher quality than Pakistan’s and that the export of coal is ” a good trade opportunity for Afghanistan.”

The rise in exports means “an awful lot of coal trucks,” most of them passing to Pakistan through the Torkham border crossing, Bryd adds. “And the better security under the Taliban and the less predatory checkpoints and collection of bribes along transport routes probably helps in the small-scale and informal mining, exploitation, and export.”

However, he says that the revenue generated from royalties from the extraction of low-value, high-bulk commodities like coal are not going to be a major contributor to the budget and could have negative long-term impacts, such as on the environment. “What would generate more revenue is the sort of big-ticket projects,” Byrd said, singling out development of the Mes Aynak copper project that went “nowhere” under previous governments.

At some point, he said, “some major neighboring countries like China or Russia may reach the point — especially China — of being willing to invest in large projects” in Afghanistan.

Byrd expresses doubts about the Taliban’s funding for development, calling the reported amount “really tiny” and saying that revenue projections may be overstated and overly optimistic.

With a narrow window into the specifics until the Taliban releases the full budget, it is difficult to judge where revenue is being collected and spent, Byrd says.

“The key thing about the whole budget is there needs to be transparency,” he said. “And we need to know better what the [Taliban] government plans to spend on so the UN or other aid agencies and NGOs don’t duplicate that spending.”