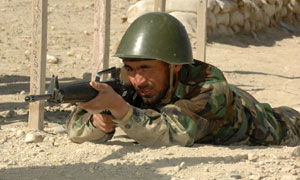 ISLAMABAD – The U.S. peace envoy to Afghanistan, Zalmay Khalilzad, along with a high-level delegation, met Sunday with leaders in Kabul to discuss bilateral cooperation after U.S. and coalition troops leave the country by a Sept. 11 deadline.

The discussions come as Taliban insurgents have intensified battlefield attacks against government forces, capturing nine Afghan districts, including six in the past week, since the foreign military withdrawal began a month ago. Hundreds of combatants on both sides and Afghan civilians have also been killed.

Mohammad Amiri said the U.S. envoy told Ghani that Washington will annually provide $3.3 billion to Kabul over the next two years to support Afghan security forces battling the Taliban.

Amiri noted that more U.S. facilities and equipment, including aircraft, to strengthen the Afghan Air Force, will be among the main topics of bilateral talks in coming days.

There has been no response from the U.S. embassy in Kabul regarding Khalilzad’s discussions with Afghan officials.

The Afghan government has long relied on close U.S. air support in battling the Taliban. Afghan officials dismiss concerns their forces may not be able to take on the insurgents in the absence of foreign military support.

Khalilzad and his delegation also held a meeting with Abdullah Abdullah, who oversees Kabul’s peace process with the insurgents.

The two sides discussed the Afghan peace process and “the new chapter of corporation” between two countries, Abdullah, who heads the High Council for National Reconciliation, wrote on Twitter.

“We reiterated our commitment for a just & durable peace with (the) Taliban through negotiations using the available opportunity,” Abdullah added.

A U.S. statement issued Saturday prior to Khalilzad’s visit said his delegation would include representatives from the Department of Defense, the National Security Council and USAID.

It said the inter-agency delegation would underscore enduring U.S. support for Afghanistan’s development and a political settlement that will end the war.

The statement added that Khalilzad will also travel to Doha, Qatar, to encourage the Taliban and Afghan government peace negotiators “to make tangible progress towards of a political settlement that protects the gains of the last two decades.”

Taliban and Kabul negotiators have held multiple rounds of peace talks in the Qatari capital since last September, but the slow-moving process has mostly been deadlocked, with each side blaming the other for stalling it.

The U.S. military withdrawal, along with NATO allies, and the ensuing peace talks between the two Afghan advisories stemmed from an agreement Washington negotiated with the Taliban in February 2020 to end nearly two decades of involvement in the Afghan war.

Last week, the U.S. announced more than $266 million in humanitarian assistance to Afghanistan, where an estimated 18 million people are in need of it.