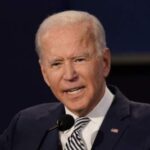 Earlier, Biden and other G-7 leaders met virtually to discuss the situation in Afghanistan, with several pushing for him to keep U.S. troops in the country beyond next week’s  deadline to facilitate the ongoing evacuation effort.

The Taliban have rejected any extension of the deadline.

“I will ask our friends and allies to stand by the Afghan people and step-up support for refugees and humanitarian aid,” British Prime Minister Boris Johnson said ahead of the virtual meeting.

With a week to go until Biden’s deadline, tens of thousands of Western citizens and Afghans who supported U.S. efforts have pushed toward Hamid Karzai International Airport hoping to make it through the gates and to the safety of outgoing flights.

The White House said early Tuesday that in the last 24 hours, another 21,600 people have been evacuated, but thousands more remain in Afghanistan who want to leave.

Many Afghans have said it has been difficult, if not impossible, to get past Taliban checkpoints lining the airport’s perimeter. And Taliban officials seem unwilling to give the United States much leeway, calling the upcoming deadline a “red line.”

“We are in talks with the Taliban on a daily basis through political and security channels” concerning “every aspect of what’s happening in Kabul right now,” national security adviser Jake Sullivan told reporters Monday at the White House.

Biden is “taking this day by day and will make his determinations as we go,” Sullivan said, defending the White House’s handling of the withdrawal, which has seen most of the U.S.-backed Afghan security forces melt away as the Taliban claimed control of the country.

“We are overperforming in terms of the evacuation numbers,” Sullivan said.

But U.S. lawmakers, Republicans and Democrats alike, former military officials and some American allies have criticized the chaotic withdrawal since Taliban forces entered the Afghan capital on August 15. “The situation in Afghanistan is worsening by the day,” Republican Senator Mike Rounds said Monday. “The Biden administration must make the safe evacuation of Americans still stuck in Afghanistan its top priority.”

But after a slow start to the evacuation, efforts to get people out of the country have picked up. Some military officials Monday expressed optimism they will be able to sustain the heightened pace of evacuations. “I assure you that we will not rest until the mission is complete, and we have evacuated Americans who are seeking to be evacuated and as many Afghan partners as humanly possible,” General Stephen Lyons, commander of U.S. Transportation Command, told Pentagon reporters late Monday.

“We are clearly laser focused on clearing the Kabul international airport of every evacuee that can move,” he said. “For me, like all of our veterans who served in Afghanistan, this mission is very personal.”

At a separate briefing earlier in the day, Pentagon press secretary John Kirby said despite the surge in evacuation numbers, “We’re not taking anything for granted.”

“There’s a lot of factors that go into being able to reach that output capacity, to include temporary safe havens that you can bring these individuals to as they complete their screening,” he said, noting the goal has been to evacuate between 5,000 and 9,000 people a day.

A growing number of U.S. officials, however, have started warning that despite the increased flow of evacuees out of Afghanistan, more time will be needed.

Democratic Congressman Adam Schiff told reporters the evacuation could be completed by the end of the month. “I think it’s possible,” he said, “but I think it’s very unlikely given the number of Americans who still need to be evacuated.”

A senior State Department official said the August 31 deadline only refers to the “military retrograde out of Afghanistan.”

“Our commitment to at-risk Afghans doesn’t end on August 31,” the official added.

But whether the Taliban will give the United States and its allies more time is questionable.

« What a Taliban Government Will Look Like
How Much Will Afghanistan Change Central Asia’s Relations With Russia, China, And The United States? »