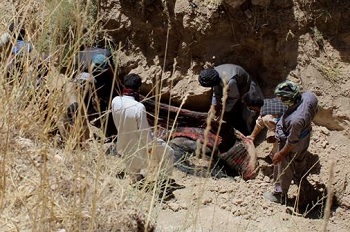 Militants loyal to the Islamic State (IS) group and Taliban outfit have reportedly massacred more than 50 people, all civilians, including women and children, after overrunning the strategically important Mirza Olang district two weeks ago.

The IS group has claimed responsibility for the carnage and said in a statement that its fighters had killed 54 people in the troubled district during the onslaught.

Although, the Taliban group has rejected its involvement in the bloodshed, villagers said that both the Taliban and IS insurgents jointly attacked Mirza Olang and committed the “crimes against humanity.”

Most of the victims, according to locals and media reports, had been shot dead and some beheaded.

To clean up the area, the government forces launched a massive offensive over the weekend and recaptured the district of Mirza Olang on Tuesday.

“The security forces succeeded in evicting the rebels from Mirza Olang and restoring government control there following heavy bombardment and ground forces operations which lasted until Tuesday,” General Amanullah Mubin, commander of 209 Shaheen Corps based in the region, told the media.

People in the country have described the killing of civilians in Mirza Olang as carnage and strongly condemned it.

“Killing civilians including women and children is against the teaching of Islamic values and those behind the heinous crimes should be bring to justice,” Kabul resident Mohammad Asghar told Xinhua.

Sayed Musa, a resident of Mirza Olang district, expressed his hatred to insurgents, noting that the militants killed his son “mercilessly” although he had never taken up arms in his life.