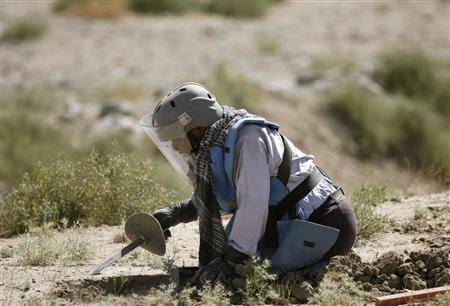 GENEVA — U.N. de-miners say the number of people being killed and maimed by landmines in Afghanistan is rising due to explosives newly planted by the Taliban.

The United Nations has been involved in clearing landmines in Afghanistan for 29 years. Over that period, the U.N. and its partners have cleared some 730,000 anti-personnel and anti-tank mines at a cost of $1.5 billion.

The U.N. estimates landmines and explosive remnants of war have killed and maimed some 30,000 civilians, with young children accounting for the largest number of victims. While casualties had been steadily dropping, the U.N. says there has been an increase in recent years.

British photographer Giles Duley lost both legs and an arm when he stepped on a landmine in Afghanistan in 2011. As CEO and founder of the Legacy of War Foundation, he works on behalf of landmine survivors around the world. He says while he has seen a lot of money being spent on de-mining activities and millions spent on immediate medical care, more help is needed.

“What I have seen is this huge gap in what happens to the survivors of landmines after [their hospital stay],” he said. “The motto that I have always used is there is no point in saving a life, if you do not give somebody their life back.”

People who have been disabled through no fault of their own should be given the opportunity to regain their dignity by being taught skills so they can support themselves and their families, Duley said.