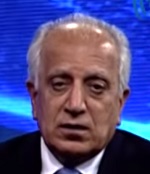 WASHINGTON — Zalmay Khalilzad, the top U.S. envoy to Afghanistan, is stepping down from his long-standing role following the Western military pullout from that war-ravaged country, the State Department says.

Secretary of State Antony Blinken on October 18 said Khalilzad, who led U.S. negotiators in talks with the Taliban in Doha, Qatar, prior to the Islamist group’s takeover of Afghanistan, was leaving his position and that his deputy, Thomas West, would take over.

“I extend my gratitude for his decades of service to the American people,” Blinken said of Khalilzad, a former U.S. ambassador to Afghanistan, Iraq, and the United Nations.

In his resignation letter, Khalilzad defended his record while also acknowledging that he did not accomplish what he wanted to do in his latest role.

“The political arrangement between the Afghan government and the Taliban did not go forward as envisaged,” he wrote in the letter to Blinken.

“The reasons for this are too complex, and I will share my thoughts in the coming day and weeks,” added the 70-year-old Khalilzad, who was born in Afghanistan and grew up in Kabul.

He said he was asked to join the administration of President Donald Trump “after the decision had been made to substantially reduce or end the military and economic burden of the Afghan engagement on the U.S. and to free those resources for vital priorities, including domestic needs and the challenge of dealing with issues related to China.”

Following a long diplomatic career, he returned to service and assumed the Afghan envoy role in September 2018, when then-Secretary of State Mike Pompeo named him to lead negotiations and attempt to bring the Taliban and the Afghan government together.

Khalilzad was unable to bring the two sides to face-to-face meetings, but he managed to reach a U.S. deal with the Taliban in February 2020 that led to the end of America’s longest-running war.

That agreement called for the withdrawal of all U.S. forces from Afghanistan. In return, the Taliban vowed to stop attacking U.S.-led NATO forces in Afghanistan and not to allow the country to become a base for international terrorists.

The final withdrawal of U.S. troops took place during the early months of the administration of President Joe Biden, who took office on January 20.

Many critics said the pullout was haphazardly conducted, leading to the leaving behind of thousands of Afghan citizens who worked for U.S. forces there over the past two decades.

The Biden administration has said the agreement that Khalilzad struck with the Taliban during the previous administration tied their hands when it came to the pullout and led to the rapid takeover of the country by the Islamist group.

Still, Khalilzad remained in his job during the Biden administration, although he did not participate in the first high-level U.S.-Taliban meeting in Doha following the withdrawal of troops from Afghanistan.

His replacement, West, led the U.S. delegation in the last round of talks in Doha, traveling to Qatar with the CIA’s deputy director, David Cohen.

West served as an aide to Biden during the current president’s term as vice president and has worked for years on U.S. policy in South Asia.

However, the State Department said on October 18 that it will not be sending a representative to a Russia-hosted conference on Afghanistan this week, with a spokesman citing “logistics” as the reason U.S. official would not travel to the Moscow talks.

With reporting by AFP, The New York Times, and CNN