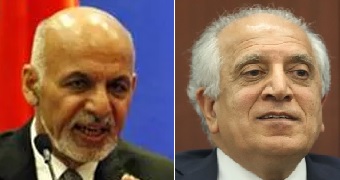 ISLAMABAD — Zalmay Khalilzad, the senior U.S. official who led the negotiations with the Taliban, blamed, for the most part, Afghan President Ashraf Ghani’s “intransigence,” the Afghan elite’s “selfishness” and Afghan soldiers’ lack of will to fight for the rapid Taliban military takeover of the country in August.

“We were all surprised by the intransigence of President Ghani in insisting on staying in power till his term ended, despite the fact that he had come out re-elected in a fraudulent election that very few Afghans participated in,” Khalilzad said Wednesday during a webinar organized by the Carnegie Endowment for International Peace, a Washington think tank.

He acknowledged for the first time publicly that the U.S. had discouraged Afghans from holding the presidential elections that led to Ghani’s winning a second term in office. Instead, Khalilzad said, the U.S. wanted to establish an interim setup that was acceptable to both sides while Afghan politicians and civil society negotiated a political settlement with the Taliban.

Ghani’s “grand miscalculation,” according to Khalilzad, was that he did not believe the U.S. would withdraw from a region that he thought gave the U.S. forces and its intelligence agencies physical proximity to strategically important countries like China, Russia, Iran and Pakistan.

“I tried to persuade him that President [Donald] Trump was very serious, and he said, ‘No, the intelligence and military told me otherwise,’ ” Khalilzad said.

Ghani also widely miscalculated his own military’s will to fight.

Once the U.S. announced its decision to withdraw, he told Khalilzad, “now I am free to fight the war the Afghan way. In six months now I will defeat the Taliban because you were fighting it poorly.”

The fact that the more than 300,000-strong Afghan army, trained and armed by the U.S., melted away in front of 60,000 Taliban, was, according to Khalilzad, the result of a lack of morale, corruption and poor treatment of the soldiers on the front lines.

“[T]hat may have had much more to do with the politics of Afghanistan — that people didn’t believe in it, the soldiers, in the cause — [but] the Taliban believed in their cause,” he said.

Khalilzad also lamented what he called the Afghan elite’s “selfish, self-centered, corrupt” behavior that led to a failure of peace talks with the Taliban.

“I am disappointed that the elite that we worked with, they didn’t rise to the occasion, this golden opportunity that the American engagement provided,” he said.

Khalilzad, who was born in Afghanistan, was criticized for negotiating a deal with the Taliban that many called a surrender. His American and Afghan critics accused him of giving too many concessions to the Taliban in return for very little. The U.S. and Taliban signed the agreement in February 2020 that defined a timeline for foreign forces to withdraw in return for counterterrorism guarantees from the Taliban.

However, the agreement also called for the Taliban to negotiate with the Afghan government and others for a political settlement to end the war. Those negotiations started in September 2020 but never picked up steam until the Taliban took over the country militarily without significant resistance from the Afghan army.

They entered capital Kabul on August 15, 2021, without firing a single shot.

Defending his agreement, Khalilzad said the mechanism allowed flexibility to delay the withdrawal date if the Taliban did not fulfil their pledges, or if the political engagement between Afghans did not progress, but President Joe Biden decided to stick close to the original timeline.

Going forward, Khalilzad advocated a robust diplomatic engagement with the Taliban that includes agreement on a “road map that takes into account the trust or mistrust of each other and the behavior that needs to take place over a time period.”

He said policy toward Afghanistan in Washington has become hostage to an “ill-informed debate” that could be detrimental to U.S. interests.

Many in America wanted the Taliban to suffer and their government to collapse, he said, because “we did not succeed in defeating them, and that has left a bad taste in people’s mouths.”

He warned that a collapse of government in Afghanistan would lead to a civil war and a humanitarian catastrophe that would provide space for terrorist groups to flourish.

He said the Taliban had shown, in the 18 months after the signing of the agreement, that they could keep their word by not killing a single American even though U.S. air attacks in defense of Afghan forces killed hundreds or even thousands of Taliban during that period.

Khalilzad also said the Taliban could benefit from outside help on how to deal with the Islamic State extremist group in Afghanistan.