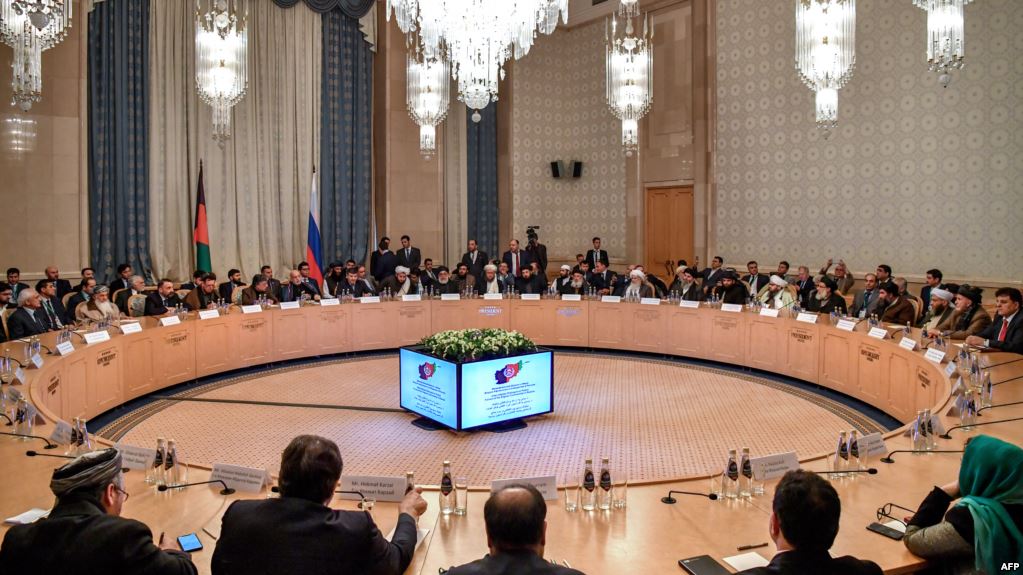 Participants attend the opening of two-day talks between Taliban and Afghan opposition representatives, at the President Hotel in Moscow, Russia, Feb. 5, 2019.

Taliban representatives and an Afghan delegation led by former President Hamid Karzai have begun two days of talks in Moscow billed as part of an “intra-Afghan” peace process — despite the absence of Kabul government representatives and continued militant attacks back in Afghanistan.

The gathering has been criticized by the office of current Afghan President Ashraf Ghani.

It comes as broader peace talks aimed at ending the country’s 17-year war appear to be gaining momentum, despite the Taliban’s continued refusal to meet directly with Afghan government representatives.

The Russian government has denied organizing the meeting, which is being hosted by a Moscow-based organization of Afghan diaspora leaders.

However, it’s highly unlikely such a high-profile event would be allowed to take place in Moscow without the Kremlin’s blessing.

Kremlin spokesman Dmitry Peskov said as the talks got under way on February 5 that there were no contacts planned by the Kremlin to meet with any of the Taliban delegates.

The Moscow talks also were expected to be attended by delegates from Afghan diasporas from the countries of the Commonwealth of Independent States (CIS) and Europe, as well as representatives from Iran and Pakistan.

Afghanistan’s chief executive, Abdullah Abdullah, said the Afghan government should be at the center of any peace talks, adding that Kabul “would prefer the Moscow meeting had a different shape.”

Abdullah also said the Taliban was the biggest obstacle to peace in Afghanistan. But he said that if the Moscow meeting creates “an opening for real peace talks, it would still be a step forward.”

The United States has not commented publicly on the meeting, which includes a 10-member Taliban delegation led by Sher Mohammad Abbas Stanikzai.

Going into the negotiating room in Moscow on February 5, Stanikzai did not respond to questions from journalists about the Taliban’s position on direct talks with an intra-Afghan delegation — saying that “comments will come later.”

Karzai made no comment at all to journalists as he went into the negotiating room.

In a post on Twitter, Karzai said he would be bringing to the talks “a message of peace, unity, sovereignty, and progress for all of us.”

Along with Karzai, the former president, many of the 38 delegates from Kabul have held prominent government positions.

Among them is potential presidential candidate Hanif Atmar, who resigned as Ghani’s security adviser in August.

Former Vice President Mohammad Yunus Qanuni and former Balkh Governor Atta Mohammad Noor are also on the list of participants, along with former Taliban insurgents who reconciled with the Afghan government.

Since his appointment last September, U.S. peace envoy Zalmay Khalilzad has been holding separate negotiations with the Taliban. He’s also pressed for talks to bring together all major parties in the conflict.

Stanikzai, the head of the Taliban delegation visiting Moscow, said on February 5 that peace talks with the United States in Qatar last month had been a “success,” Russia’s Interfax news agency reported.

In Washington, U.S. General Joseph Votel, head of the U.S. military’s Central Command, told a Senate hearing that talks between the United States and Taliban were in their “very, very early” stages.

The Afghan government has to be “a part of this solution and must be in the negotiation aspects of this,” he also said, adding: “We can’t do that on their behalf.”

A pre-dawn militant attack on February 5 on an army base in northern Kunduz province killed at least 26 members of the security forces, said Mohammad Yusouf Ayubi, head of the provincial council.

Ayubi said the attackers were eventually repelled after reinforcements arrived at the besieged base on the outskirts of the provincial capital, Kunduz city.

Late on February 4, at least 21 people were killed in two Taliban attacks.

Eleven police officers were slain when the insurgents stormed a checkpoint in northern Baghlan Province, and 10 people were killed in a militant attack on a local pro-government militia in a village in northern Samangan province.

With reporting by Reuters, AP, Interfax, and TASS