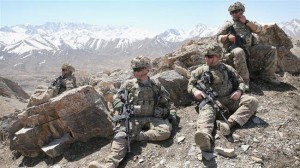 Hundreds of US infantry soldiers are to be mobilized this summer prior to being deployed to Afghanistan in support of the US-led ‘Operation Freedom Sentinel,’ purportedly billed as the continuation of “the global war on terrorism.”

Nearly 400 troops from the Wisconsin National Guard’s 1st Battalion, 128th Infantry will be preparing in the upcoming months before the deployment to the war-ravaged country, where American forces have been bogged down for nearly 18 years amid steadily rising terror incidents across Afghanistan, local news outlets reported Saturday.

According to a report by Tribune News Service, the infantry battalion — based in Eau Claire, Wisconsin — and its subordinate companies, which are all part of the 32nd “Red Arrow” Infantry Brigade Combat Team, will be sent off to Afghanistan as “a security element” for the US-led coalition forces operating in the country.

The Wisconsin National Guard (WNG) has been involved in several military deployments across the globe.

This is while the guard’s 1st Battalion, 128th Infantry has deployed numerous times to combat missions in the region since the September 11, 2001 terror incidents in the US, including multiple tours from 2004-06 and 2009-10 in support of what the Pentagon has code-named ‘Operation Iraqi Freedom,’ during which tens of thousands of Iraqi civilians were killed, injured, falsely detained and interrogated, tortured and displaced.

According to the report, Operation Freedom Sentinel is the official name for the mission succeeding the so-called Operation Enduring Freedom in continuation of the US military’s purported global war on terrorism.

US-led military forces engaged in a massive occupation of Afghanistan in October 2001 and overthrew a Taliban regime in power at the time, vowing to uproot terrorism and the Saudi- and Pakistani-backed Taliban in the country.

However, US forces have remained bogged down in the country through the presidencies of George W. Bush, Barack Obama, and now Donald Trump amid persisting terrorism and flourishing narcotics production and trade across Afghanistan.

Moreover, Washington has lately been negotiating with the very Taliban terrorists that it originally vowed to uproot, without the participation of Afghanistan’s government authorities, who reject the so-called peace talks with the notorious militant group as it continues its terror campaign throughout the country.