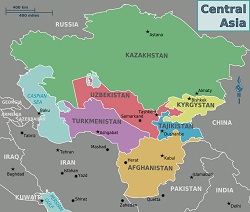 There has been a good deal of speculation about how the withdrawal of foreign forces from Afghanistan and the dramatic change of power there will affect Central Asia’s relations with the big powers.

Some say Russia’s presence in the region will be strengthened, or perhaps China’s, and U.S. influence will be on the wane in the coming years.

It is arguably more likely that little about Central Asia’s relationships with the big powers, as they currently stand, will change at all.

Some have said the final U.S. withdrawal from Afghanistan is a blow to Washington’s reputation in Central Asia and the beginning of an ebb in relations between the United States and those five post-Soviet republics.

But Central Asian governments are unlikely to forget how much 20 years of the U.S.-led military operation in Afghanistan meant to them.

Especially now, with the Taliban seemingly resurgent in Afghanistan, one could argue that no countries benefited more from the U.S. presence in Afghanistan than the states of Central Asia.

After the Taliban reached Central Asian borders in the late 1990s, the governments of Kazakhstan, Kyrgyzstan, Tajikistan, and Uzbekistan were on the verge of panicking.

Only Turkmenistan, with its official policy of neutrality, managed to reach an understanding with the Afghan militant group.

After the United States and its allies started military operations in Afghanistan in late 2001, those threats were removed from Central Asia’s borders and northern Afghanistan was a relatively peaceful area until 2013.

During those years, Central Asia was allowed to develop while remaining shielded from Afghan instability thanks to the efforts of the United States, its foreign allies, and Afghan government forces.

While the results of the U.S. withdrawal from Afghanistan might have been unexpected, the pullout itself had been announced 10 years earlier by then-U.S. President Barack Obama; so Central Asia’s leaders knew foreign forces were leaving Afghanistan and had 10 years to prepare for it.

Between 2001 and 2021, the United States helped Central Asia increase its capacity to identify and neutralize threats from Afghanistan through joint training, funding and equipment for border security, and military vehicles including quad bikes, trucks, and (for Uzbekistan) MRAPs (mine-resistant ambush-protected vehicles).

The United States provided and still provides aid to Central Asia, recently including COVID-19 vaccines, has attempted to boost trade with the region’s individual states where possible, and has supported efforts by those states to join international organizations like the World Trade Organization (WTO).

And the United States provides a counterweight to Russia and China, allowing Central Asia to avoid falling too much under the influence of either Moscow or Beijing.

Some feel Russian influence in Central Asia will be significantly enhanced now that the United States and its allies have departed Afghanistan.

In terms of security in Central Asia, Russia has long had a presence there. That began long before U.S. and allied troops were deployed to bases in Kyrgyzstan, Tajikistan, and Uzbekistan to support the operations in Afghanistan.

Russia’s 201st Division has been based in Tajikistan since the 1940s, and under the terms of an agreement signed in 2012 will remain there until at least 2042.

Russia opened a military base at Kant, in Kyrgyzstan, in 2003, after U.S. forces were already stationed in Kyrgyzstan, and, under the terms of an agreement signed in 2012, Russian forces will stay there until at least 2027, with an option to extend that deal by another five years after that.

Technically, the Russian-led Collective Security Treaty Organization (CSTO), which allies Russia, Armenia, Belarus, Kazakhstan, Kyrgyzstan, and Tajikistan, runs the base at Kant. But nearly all the troops and military equipment currently there come from Russia.

There has been no sign that Russia plans to increase its military presence in Kyrgyzstan or Tajikistan and, so far, no word that Russia is seeking to use bases in other Central Asian countries.

Russia has recently conducted joint military exercises with Tajikistan and Uzbekistan near the Afghan border, and CSTO exercises in Kyrgyzstan started on August 24.

But Russia did the same thing in the late 1990s and has regularly conducted such exercises with Kazakhstan, Kyrgyzstan, and Tajikistan throughout the years the United States was in Afghanistan. And after Shavkat Mirziyoev became Uzbekistan’s president in 2016, Moscow also renewed military drills with Uzbekistan.

Certainly, Moscow could play on Central Asian fears of threats from Afghanistan — most of which the Kremlin has stoked for 25 years — and use its new clout in the region to pressure Central Asian states into moving closer to Russia and further from the West, or even from China.

Russia might also convince Uzbekistan to rejoin the CSTO, which Tashkent has joined and left twice already (1992-1999 and 2006-2012), or even pry Turkmenistan out of isolation and firmly under Russian influence, a process already under way in recent years.

But Moscow has been sending mixed messages lately about the threat from Afghanistan.

Russian officials are now downplaying the dangers of the Taliban, with some suggesting a Taliban government will be easier to cooperate with than the UN-backed government that has now mostly fled, which is not what the Central Asians were hearing from Moscow for the last quarter of a century.

Russian officials now contend that the threat out of Afghanistan comes from the non-Afghan Islamic extremists in that country, some of whom are citizens of Central Asian countries, who could cross the border into Central Asia and create instability.

The Central Asian governments might well agree with that assessment.

But even if that’s the case, how much could Russia help them?

Unless such groups were foolish enough to try to cross en masse, there is little that Russian firepower could do to help Central Asians.

Small groups of extremists or individuals crossing into Central Asia to carry out terrorist attacks are difficult to repel and, in the end, would represent an internal threat to any country in question.

Bilateral or multilateral defense treaties are based on foreign or external threats, and partners are not bound to come to the aid of an individual country facing a threat from domestic enemies. Moreover, to date in Central Asia, none has ever done so.

There have been suggestions that Beijing might take advantage of the U.S. withdrawal from Afghanistan to expand its influence in Central Asia.

But Chinese sway in the region is mainly economic, although it has undoubtedly helped Central Asian states contend with perceived security threats (mainly so such threats don’t spill over into China).

China sells weapons in Central Asia, and has conducted joint military exercises and drills both bilaterally and within the framework of the Shanghai Cooperation Organization (SCO) that also includes Kazakhstan, Kyrgyzstan, Tajikistan, Uzbekistan, as well as Russia, Pakistan, and India.

Beijing also operates a small military base in a remote area of eastern Tajikistan guarding the high mountain gateway to China.

Some think China could send troops to help Central Asia if the region were being destabilized from elements coming out of Afghanistan.

This is unlikely to happen.

Deploying Chinese forces to prop up a government in a predominantly Muslim country could compound any security problems a Central Asian state might have, potentially making it a magnet for jihadists.

The brutal campaign Beijing has launched against its own Muslims — Uyghurs, Kazakhs, Kyrgyz, and Hue — has already blackened China’s reputation and angered many outsiders.

Furthermore, although China has built up a formidable army in the last 25 years, its history of foreign military ventures since the communists came to power does not engender much confidence.

Chinese troops took appalling losses in Korea in the early 1950s and during the brief Ussuri River battle with Soviet forces in 1969, as well as during the incursion into Vietnam in 1979. Beijing has not sent its military to fight in another country in more than 40 years.

In 2016, two Chinese peacekeepers were killed in South Sudan — news that shocked the Chinese public. Explaining the loss of dozens more Chinese soldiers in another foreign venture could prove problematic for Beijing.

That said, China has invested a large amount of money and been able to extract huge amounts of raw materials — including oil, natural gas, uranium, iron, and more — over the course of more than two decades in Central Asia.

The region’s governments have seemingly profited from those ventures, and some of their citizens have found jobs working on Chinese projects.

But the days of the huge Chinese projects in Central Asia — the oil and gas pipelines, the new railways and roads, oil refineries, and other infrastructure — are coming to an end, if they are not over already.

China will continue to invest in Central Asia and extract valuable resources. But Beijing will not be spending the amounts of money it did 10 and 20 years ago. And the bills for loans that Central Asian governments took from China during those years are coming due, leaving many of those countries hard-pressed to make payments.

Anti-Chinese sentiment is on the rise in Central Asia and could increase as citizens increasingly view their governments as having sold out to Beijing.

Central Asian governments’ fears regarding Afghanistan could lead them to make rash decisions about foreign partnerships in the coming months.

But, in truth, they might not need much outside help at all.

The first time the Taliban showed up at their doorstep, all five Central Asian states had been independent for a mere five years and the civil war in Tajikistan was still raging.

There was good reason at the time for their respective leaders to be concerned about their future in a region of rising instability.

Now, these countries have been independent for 30 years, the Tajik civil war is almost 25 years in the past, Central Asia is generally seen as a stable region, and regional ties are better than they have been since the early years of independence.

Their militaries are larger and better equipped.

Their borders with Afghanistan are better defended.

And they are all more familiar with the Taliban now than they were when that militant group first swept through Afghanistan in the second half of the 1990s.

Their best defense could be their own unity.