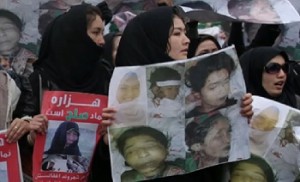 Three bombs struck outside the school entrance as students were leaving for the day, just before the time to break their fast, leaving at least 68 dead and hundreds wounded — all of them young girls with big dreams.

The ghastly attack, claimed by the Daesh terrorist group, follows a dangerous pattern of similar attacks in recent years on the persecuted community of Hazara Shias in Afghanistan, and neighboring Pakistan.

The genocidal attacks have become so regular that they no longer evoke condemnation or outrage from the world’s big-mouthed human rights champions. There are no candle-light vigils for them, no protest marches, no high-level probes, not even those evocative social media hashtags. Their deaths are reduced to cold statistics.

The congested Dasht-e Barchi neighborhood of western Kabul has morphed into one of those harrowing places where life and death dance together. The place has borne the brunt of violence over the years, especially since the Daesh terrorist group gained foothold in the war-ravaged country in 2013-2014.

The group’s hatred for Shias has a historical background, dating back to the assassination of Ali Ibn Abi Talib (AS) in 40 A.H. Daesh ideologues take inspiration from those who carried out the murderous assault on the first Shia Imam in Kufa. They praise the murderers of his son Hussain ibn Ali (AS) and deem the slaughter of his followers legitimate.

The Hazara ethnicity only makes this community of Shias more vulnerable to Daesh’s hate-driven violence.

Hazara Shias, among the most persecuted ethnic minorities in the world, are among the few races whose origin remains shrouded in mystery.

There are multiple theories about their origin. Some anthropologists trace their ancestry to Turko-Mongols, while some believe they were originally Buddhists who lived in Hazarajat, the territory inhabited by Hazara people in the central highlands of Afghanistan, since the period of Kushan Dynasty 2000 years ago, before the arrival of Islam.

The country has a grim history of ethnic violence, in particular the targeted killings of Hazara Shias. In late 1900s, brutal Pashtun ruler, Abdul Rahman Khan, had ordered extermination of all Shias in central Afghanistan, which led to the massacre of thousands of Hazara Shias.

Their properties were seized and they were forced to abandon their homes. For almost a century, Hazara Shias were incarcerated and sold as slaves to wealthy merchants. Their women and children were sexually abused. Many of them were forced to observe taqiyya (seclusion), according to multiple historical accounts.

Their situation only turned worse in later decades, especially during the tyrannical rule of Taliban in 1990s, when their houses would be raided and they would be identified and killed, mostly in northern provinces of the country.

“Hazaras are not Muslims, you can kill them,” Moulvi Mohammed Hanif, a Taliban commander, once famously told a gathering of Pashtun tribal elders in northern Afghanistan.

While many Hazara Shias fled to Pakistan and Iran during 1990s, many stayed back to face the specter of unutterable horror. In one of the most barbaric episodes in recent history, thousands of Hazara Shias were systematically killed in northern Mazar-e-Sharif city in 1998, which author-analyst Ahmed Rashid describes as “genocidal in its ferocity”.

Interestingly, Taliban has in recent years distanced itself from the violence perpetrated against the minority community, shifting the blame on its arch-foe, Daesh.

What is, however, important is also the role played by foreign occupiers in ensuring that terrorist groups — both Taliban and the Daesh — seize control of the country.

As the acclaimed journalist and author, Anand Gopal, told me in an interview once, the blame for resurrecting the insurgency in Afghanistan ultimately rests with the Americans.

Keeping the pot boiling, after all, works in their favor and make a case for their continued involvement in the war-ravaged country, despite facing a humiliating defeat from the Taliban.

Dasht-e Barchi and other smaller pockets inhabited by Shias in Kabul have seen an unbroken chain of attacks in recent years, mostly claimed by Daesh. Two of the attacks that instantly come to mind are from 2016, when I was stationed in the Afghan capital as one of the foreign journalists.

At least, 18 people were killed and 54 wounded in October that year after a gunman wearing army fatigue opened fire at Shia mourners commemorating Ashura (Muharram 10) at Ziyarat-e Sakhi shrine in the Shia-dominated area of Kabul. Victims included four women and two children.

Daesh immediately claimed responsibility for the gruesome attack. The next day, in a show of exemplary defiance, thousands of Hazara Shias marched through the streets of Kabul, remembering the martyrs of Karbala and Kabul.

Exactly 40 days later, on the occasion of Arbaeen, terrorists struck again in Kabul. At least 27 people were killed and hundreds wounded after a suicide bomber blew himself up at Baqir-ul-Uloom mosque on highly-fortified Darul Aman Road, a few blocks away from the parliament house.

The bloody juggernaut rolled on with civil administration, security and intelligence apparatus watching the whirlpool of violence as silent spectators. I, as a journalist, soon began to lose the count of attacks and resulting civilian casualties.

In June 2017, in yet another attack by Daesh terrorists on a mosque in an area of Kabul dominated by Shia Muslims, scores of people were killed. The attack on al-Zahra mosque in the holy month of Ramadan, which came a month after a massive truck explosion in the Afghan capital, showed that the terrorist group had firmly planted itself in the war-torn country.

The fears grew four months later, in October 2017, after a bombing at Imam Zaman Mosque in the same area left at least 39 dead. The cleric leading the prayers was among those killed, who were later laid to rest in a single row, next to each other, the way they offered their prayers together.

The terror campaign continued unabated as the local security agencies and their foreign patrons stood paralyzed. In March 2018, a Daesh suicide bomber attacked a gathering commemorating the death anniversary of Abdul Ali Mazari, a revered leader of Afghanistan’s Hazara Shias, who was killed by the Taliban in 1995.

Five months later, more than 34 young students were mowed down in cold blood at an educational center in Dasht-e Barchi neighborhood. The students were preparing for university entrance exams at that time. Their dreams were buried along with them.

A year later, in August 2019, on a day marking 100th anniversary of Afghanistan’s independence from Britain, a Daesh suicide bomber struck at a wedding event of a young Shia Hazara couple in Kabul, massacring 63 people and injuring hundreds. The bride and groom survived, but not many in their immediate and extended families escaped the horror.

The worst of all attacks, however, came in May 2020 when terrorists masquerading as policemen killed 15 pregnant women and newborns at a maternity hospital in Dasht-e Barchi area.

The hospital run by Medicine Sans Frontier (MSF) had its shutters down soon, after the funding organization pulled out under pressure.

If this wasn’t enough, in October 2020, another attack targeted an educational center in a crowded Shia neighborhood of Kabul, killing 30 people, mostly young students between 15 and 26 years of age.

More recently, seven Shia Hazara laborers were killed by Daesh terrorists at a plastics factory in eastern city of Jalalabad on March 4 2021. They were blindfolded and their hands were tied before being silenced forever.

In the wake of this terrifying spiral of targeted violence, and lack of protection from the law enforcement agencies, many mosques, educational institutions and healthcare facilities belonging to Hazara Shia community are now being guarded by young Hazara volunteers themselves.

However, as the latest attack revealed, the security cover is still not tight enough to prevent terrorists from striking at will.

Across the Durand Line

Meanwhile, in neighboring Pakistan, Hazara Shias, who constitute a tiny minority of migrant population putting up in small ghettos, continue to live in fear. They have also been at the receiving end of violence perpetrated by militant groups under different banners.

Hazara Shias in Pakistan have been targeted by banned militant groups such as Lashkar-e-Jhangvi, Sipah-e-Sahaba as well as Daesh.

According to a 2019 report by Pakistan’s National Commission for Human Rights, at least 509 Hazara Shias have been killed for professing their faith since 2013. Human Rights Commission of Pakistan says nearly 1,000 Hazaras were killed in sectarian violence between 2009 and 2014.

In a most recent case, Daesh terrorist group claimed responsibility for killing 11 coal miners in the southwestern province of Balochistan in June 2021, all of them Hazara Shias.

The gruesome incident, downplayed by Pakistani authorities, forced the members of Hazara community to raise their voice loudly and fearlessly. They staged a sit-in, with bodies of slain men, in the freezing cold, demanding justice and protection.

Prime minister Imran Khan called it an “inhumane act of terrorism,” but refused to come to meet the protesting families. When they refused to bury the bodies until their demands were met, PM Khan accused them of trying to “blackmail” him.

They were eventually laid to rest in a mass grave on the outskirts of the provincial capital Quetta.

Their demand for justice, like on several occasions before, went unheeded.

Syed Zafar Mehdi is a Tehran-based journalist editor and blogger with over 10 years experience, he has reported extensively from Kashmir, India, Pakistan, Afghanistan and Iran for leading publications worldwide. Can be reached at armaan.journo@gmail.com.

(The views expressed in this article do not necessarily reflect those of Press TV.)