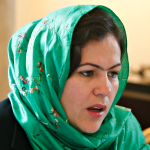 ISLAMABAD – Officials in Afghanistan said Saturday a prominent female peace negotiator had survived an assassination attempt ahead of U.S.-brokered negotiations with the Islamist Taliban.

Fawzia Koofi, a 45-year-old former Afghan parliamentarian and a renowned human rights activist, was returning to Kabul from the neighboring northern Parwan province Friday evening when unknown gunmen ambushed and attacked her vehicle in a marketplace near the capital city.

Koofi was “slightly” wounded but she was in “good health,” tweeted Mohammad Masoom Stanekzai, the head of a 21-member national team designated to negotiate a political settlement to the country’s long conflict with the Taliban.

No one claimed responsibility for Friday’s attack that Afghan President Ashraf Ghani denounced as a “cowardly” act.

“I strongly condemn the assassination attempt on Ms Fawzia Koofi @FawziaKoofi77 and call upon the government to identify and apprehend the culprits and possible motive for the attack,” tweeted Abdullah Abdullah, who is overseeing the national political reconciliation process with the Taliban.

The Taliban denied its involvement in the attack saying the group had “nothing to do with it.”

Koofi has served as the first woman deputy speaker of Afghanistan’s parliament and is known as a vocal critic of the Taliban. She has survived several previous assassination attempts allegedly plotted by the insurgents.

A series of recent high-profile attacks in an around Kabul have gone unclaimed, though militants loyal to the Afghan branch of the Islamic State group have taken credit for plotting some of them.

The Ghani-led government has promised to investigate and expose perpetrators of those attacks but no progress has been reported so far.

The proposed Afghan-Taliban talks are an outcome of a deal the United States signed with the Islamist insurgency in February to extricate American troops from the nearly 19-year Afghan war and promote a peaceful settlement of decades of hostilities.

The Afghan government Friday released the first 80 of a last group of 400 Taliban prisoners ahead of the talks expected to begin later this month in Doha, the capital of Qatar, where the U.S.-Taliban deal was signed and which hosts the insurgents’ political office.

The prisoner swap is part of the pact and a Taliban condition for starting much-hoped-for peace negotiations. It calls for the insurgents to release the 1,000 Afghan security personnel they held captive and for the Kabul government to free 5,000 Taliban prisoners.

Friday’s attack on Koofi came hours after a group of United Nations rapporteurs in a joint statement called on Afghan authorities to take “early decisive action” to prevent killings of human rights defenders in the country.

“The killing of one human rights defender is a tragedy for society; the death of nine defenders since the beginning of this year shows the emergence of a truly alarming trend,” Mary Lawlor, U.N. special rapporteur on the situation of human rights defenders, said, according to a U.N. release.

The statement noted that investigations in many cases have not yielded any results and lamented that “impunity” allowed the perpetuation of such crimes.