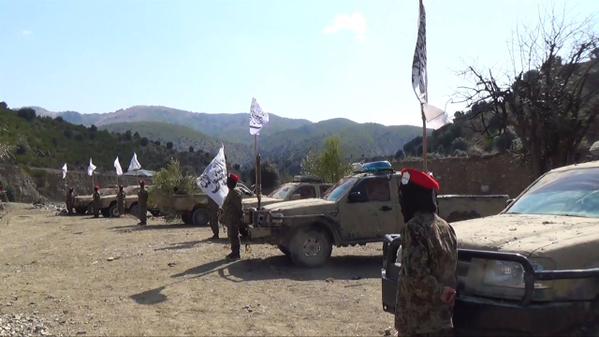 On the increasingly crowded battlefields of Afghanistan, a feared, commando-style Taliban unit is gaining attention for a series spectacular, deadly attacks on Afghan security forces.

Known as “Sara Kheta” — Red Unit or Danger Unit in Pashto — it is said to be the Taliban’s elite special-forces group. Unlike regular Taliban fighters, analysts say the outfit is better trained and armed and is sent on special operations targeting bases and posts of the Afghan National Army and police force.

The so-called Red Unit’s rise has raised concerns among government forces struggling to fend off the Taliban since the withdrawal of NATO troops in 2014 and suffering record casualty rates on the battlefield.

When did it emerge?

The first mention of a Taliban “special-forces unit” was in June 2015, when Taliban fighters published photos on social media purportedly showing a training camp where recruits were being trained on heavy machine guns and antiaircraft guns.

In December 2015, the Taliban said it was unleashing its special forces to eliminate fighters allied with the militant group Islamic State (IS) that had emerged in Afghanistan earlier that year.

In August 2016, Afghan military officials confirmed the existence of the Taliban’s Red Unit in the southern province of Helmand.

But the unit has fought its way to greater prominence in the past month or so. On November 1, the Taliban uploaded photos of the unit on its official Telegram account. The photos show members of Red Unit in new uniforms and armed with the kind of tactical assault gear worn by soldiers and law enforcement teams around the world.

Weeks later, Afghan officials blamed it for a spate of attacks on November 13 and 14 during which dozens of Afghan security personnel were killed in the southern province of Kandahar and the western province of Farah.

On December 3, Afghanistan’s intelligence agency said the commander of the new unit, Mullah Shah Wali, also known Mullah Naser, was killed in an air operationin Helmand Province the week before.

How is it different from other Taliban units?

“What distinguishes this force from other fighting units is its intensive and longer training, the degree of vetting, its tactics, weapons and equipment, and structure,” says Borhan Osman, senior Afghanistan analyst at the International Crisis Group (ICG).

Military analysts estimate the size of the unit at anywhere from several hundred to up to 1,000 fighters.

Those tactics and capabilities were on show in the November attacks when Afghan officials said the unit, equipped with lasers and night-vision gear, attacked police checkpoints and army bases and rapidly left the scene to avoid NATO air strikes. On November 14, the unit drove a pickup truck loaded with explosives into a police checkpoint point and then launched attacks on 14 nearby posts, killing over two dozen police officers.

The U.S. military has equipped many Afghan soldiers with night-vision equipment, but police forces rarely possess them.

“The Red Unit and regular Taliban forces use the same types of weapons: small arms, RPGs, and machine guns,” says Bill Roggio, senior fellow at the Washington-based think tank Foundation for Defense of Democracies and editor of the Long War Journal. “Typically, the Red Unit has newer weapons, and is occasionally seen with night-vision devices that have been seized from Afghan forces.”

The unit is believed to equipped with the Taliban’s most advanced weaponry, including 82-millimeter rockets, laser pointers, heavy machine guns, and U.S.-made M-4 assault rifles. They are also known to have used and possess dozens of armored Humvees and Ford Ranger pickup trucks stolen from Afghan forces.

Ahmad K. Majidyar, a South Asia and Middle East expert for the Washington-based Middle East Institute, says it is misleading to call the unit a special-forces outfit because it lacks elite commando capabilities of even the Afghan Special Forces, let alone advanced elite commando units such as the U.S. SEAL Team Six.

“The Red Team is more a heavily armed group used in surprise attacks against vulnerable Afghan security check posts,” he says. “It also has well-trained snipers that aid ordinary Taliban militants in their attack against the Afghan forces.”

The unit has also spread from southern Afghanistan, where it was established, and has expanded into eastern and western regions.

How much of a threat is it?

“The Red Unit poses a significant threat to Afghan forces,” Roggio says. “It has had great success on the battlefield when going head to head with Afghan units.”

The NATO-led mission in Afghanistan has said it has not seen any evidence of the Taliban possessing advanced weaponry like night-vision equipment, which Afghan officials say the militants have purchased on the black market or have accumulated after overrunning Afghan army bases.

But Afghan military officials have confirmed the unit’s capabilities.

Kandahar’s powerful police chief, General Abdul Raziq, has said the Red Unit is part of the Taliban’s “new approach and new tactics,” adding that it was “well equipped and highly armed.”

“The Taliban will suffer more significant losses on the battlefield in the coming months,” he predicts.

« MPs Approve 11 Ministers but Rejected Female Candidate
Protected but Stifled, a Pakistani Minority Feels Imprisoned in its Own Community »