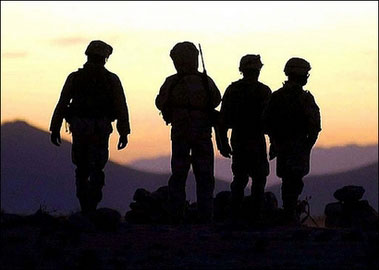 The last German, Italian, and North Macedonian troops have returned home from Afghanistan, bringing their nearly two-decade deployment to a close as part of an accelerated withdrawal of foreign forces from the war-wracked country.

The U.S.-led coalition agreed in April to end their 9,600-strong mission in Afghanistan after President Joe Biden announced that Washington would complete the withdrawal of American forces by September 11, the 20th anniversary of the terrorist attacks by Al-Qaeda on the United States that prompted the invasion and ouster of the Taliban government that sheltered the terrorist network.

Many allies are wrapping up their presence in Afghanistan amid reports saying that the U.S. military could complete its withdrawal well ahead of the September 11 deadline as the Taliban insurgency ramps up its offensive across Afghanistan.

Reuters reported on June 29 that the U.S. military appears just days away from completing its pullout.

Citing unidentified U.S. officials, the agency said the withdrawal would not include some 650 troops that will remain to protect diplomats at the U.S. Embassy and potentially assist securing the Kabul airport.

“This week could be a critical week in the withdrawal and end of the retrograde process,” CNN quoted an unnamed defense official as saying.

Fighting has surged since the United States began withdrawing early last month, with the Taliban seizing swathes of territory. The Pentagon now estimates the Taliban controls 81 of the country’s 419 district centers.

The accelerated pace of the U.S. withdrawal has raised concerns that the country could erupt in a full-scale civil war.

“The security situation is not good right now,” General Scott Miller, the top U.S. and NATO commander in Afghanistan, said in a news conference on June 29.

“A civil war is certainly a path that can be visualized if this continues on the trajectory it’s on right now, that should be of concern to the world,” he said.

Three Luftwaffe transport aircraft landed at the Wunstorf air base in northern Germany on June 30, bringing home a total of 264 men and women — the last German soldiers of the NATO Resolute Support mission aimed to train Afghan forces, according to Germany’s military.

Germany lost 59 soldiers in Afghanistan, including 35 killed in combat or the result of militant attacks. The ground battles in Afghanistan were the first that the German military fought since the end of World War II.

The last Italian soldiers deployed in Afghanistan arrived at the military airport in the central city of Pisa late the previous day, with Defense Minister Lorenzo Guerini paying tribute to the 53 Italians who died and 723 who were injured over the past two decades.

Italy and Germany were two of the five countries most involved in Afghanistan along with the United States, Turkey, and Britain as part of the Resolute Support noncombat mission.

Germany’s contingent, which focused on northern Afghanistan, was around 1,100 strong as of April. It was second in number only to the U.S. contingent.

North Macedonia’s last contingent also returned home on June 29, with Defense Minister Radmila Sekerinska praising the “sacrifice” of the Balkan country’s 3,500 servicemen who had served in Afghanistan between 2002 and 2015.

« 91 COVID-19 Deaths Reported in Afghanistan in 24 Hours
Khan: Pakistan Can Never Again Be US Partner in War »