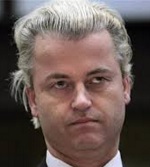 Dutch far-right lawmaker Geert Wilders has cancelled a planned contest calling for cartoon caricatures of the Muslim Prophet Muhammad amid mass protests against the event in Pakistan.

Wilders, who had received death threats over his plans, said late on August 30 that he decided to cancel the event to “avoid making people victims of Islamist violence.”

Physical depictions of Allah or the prophet, even positive ones, are considered blasphemous under Islam and are forbidden. In Pakistan, such blasphemy is punishable by death and the mere accusation of it can cause lynchings.

Wilders said that strong opponents “see not only me, but the entire Netherlands as a target.” The organizers of street protests in Pakistan had called on Islamabad to break off diplomatic relations with the Netherlands over the event.

The lawmaker canceled the contest even as an estimated 10,000 Pakistanis continued their march from the eastern city of Lahore to Islamabad to protest the event. The protests were sponsored by Pakistan’s Tehreek-i-Labaik Islamist political party.

Pakistan deployed thousands of troops to protect a diplomatic enclave in the capital on August 30 as angry protesters approached Islamabad.

The thousands of police and paramilitary troops that were already guarding the highly fortified enclave in the capital that houses embassies were reinforced with around 700 troops, a police official said.

Before demonstrators arrived in Islamabad, they were briefly halted by police in the town of Jhelum. But when protesters threatened to resist police in a way that could have led to violence, authorities relented and allowed them to proceed, AP reported.

“We are on roads to show to the world that we can die to protect the honor of our Prophet,” Labaik party leader Khadim Hussain Rizvi told the crowd.

In a statement, the Taliban’s main spokesman called the planned contest “blasphemous” and a “hostile act” by the Netherlands against all Muslims.

Members of the Afghan security forces, “if they truly believe themselves to be Muslims or have any covenant towards Islam, should turn their weapons on Dutch troops” or help Taliban fighters attack them, the statement said.

Around 100 Dutch troops are serving in the 16,000-strong NATO Resolute Support mission to train and advise Afghan forces, according to the Dutch Defense Ministry.

The controversy over Wilders’ now-cancelled cartoon contest echoed a controversy over Muhammad cartoons in 2005, when the publication of pictures of the prophet in a Danish newspaper led to protests and violence in many Muslim countries.

On August 30, a 26-year-old man of Pakistani descent who had threatened on Facebook to attack Wilders was remanded in custody by a judge in the Dutch capital, The Hague. He is accused of preparing to commit a murder and inciting with terrorist intent, among other crimes.

The Dutch government had been at pains to distance itself from the contest.

“His aim is not to have a debate about Islam. His aim is to be provocative,” the prime minister said.

However, Rutte added that people in the Netherlands have far-reaching freedom-of-speech rights and the government did not intend to seek the contest’s cancellation.

The anger sparked by Wilders’ plans in Pakistan had prompted the Netherlands to caution citizens about travelling there and to postpone a planned trade mission to the South Asian country.

With reporting by AP, AFP, dpa, and Reuters