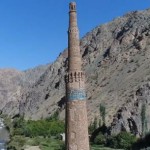 Defense One:  The group continues to attack sites and antiquities. In May, Taliban fighters in northwest Afghanistan attackedsecurity posts that were providing protection for the ancient Minaret of Jam. The 12th-century minaret, known for its intricate brick construction and ancient Arabic calligraphy, is one of only two sites in Afghanistan that hold UNESCO World Heritage status. The attackers killed 18 members of the government security forces and cut off access to the minaret, the status of which is unknown. So it is alarming that cultural heritage does not seem to be on the agenda for the peace talks with the Taliban. Click here to read more (external link).