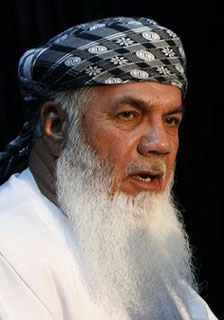 HERAT, Afghanistan — Afghan security forces and Taliban militants clashed again on the outskirts of the western Afghan city of Herat on July 31 — a day after the militant group attempted to storm into the city.

A Taliban spokesman, Zabihullah Mujahid, told RFE/RL’s Radio Azadi on July 31 that the Taliban’s advance on Herat was in response to attacks by government forces and pro-government militia forces on Taliban-held areas nearby.

The governor of Herat Province, Abdul Sabur Qani, said the Taliban had been pushed back from the provincial capital — echoing statements made to Radio Azadi on July 30 by officials from the Afghanistan Defense and Interior ministries.

Qani said that about 200 Taliban fighters were killed “in air strikes and ground operations” while attempting to advance into the city from the adjacent Guzara district.

“The Taliban had launched attacks on the city from the east and west last night and tried to infiltrate the city,” Qani told reporters on July 31. “They were pushed back by the Afghan security and defense forces and the Taliban suffered heavy casualties.”

“The Taliban tried to capture Guzara district near Herat city,” Qani said. “But Afghan security forces have since retaken it. On the outskirts of the city, where the Taliban are still active, the security forces are fighting them.”

“The Taliban also tried to threaten the road leading from the city to Herat Airport and the Guzara district,” Qani said. “However, Afghan security forces have cleared the way.”

Those who have been fighting against the Taliban for the past two weeks under the command of Ismail Khan are calling themselves “the people’s resistance forces.”

“We make sure we stand up to the enemy and will not allow the Taliban to enter the city,” Ismail Khan told reporters on July 31.

Support from Ismail Khan’s forces is seen as vital for the defense of the city. He is an ethnic-Tajik former warlord who rose to power during the Soviet-Afghan war in the 1980s when he commanded a large mujahedin force in western Afghanistan.

His militia fought fiercely against the Taliban during the 1990s. After the collapse of the Taliban regime in 2001, he became the governor of Herat Province and then took a post in the Afghan government as Minister of Energy and Water from 2005 to 2013.

As a politician, he is a key member of the Jamiat-e Islami party — a mostly ethnic-Tajik political force that includes most of the surviving former Northern Alliance commanders who had fought against the Taliban during the 1990s.

Despite claims by Afghan government officials of heavy Taliban losses, there have been disturbing reports from the battle around Herat city.

The provincial governor’s office said in a statement that Abdul Hamid Hamidi, commander of the 1st Brigade of the 207th Zafar Corps, has been killed after being captured by the Taliban.

An Afghan police guard was killed on July 30 in Herat city at the compound of the United Nations Assistance Mission in Afghanistan (UNAMA) when it was attacked by militants firing rocket-propelled grenades and assault rifles.

Although the UN said it was still trying to establish a full account of the assault, the U.S. State Department described the attackers as “anti-government militants.”

Meanwhile, a Herat police officer who has been fighting for days against the Taliban in the security belts that surround the city told Radio Azadi that the morale of the city’s defenders is being affected by logistics problems.

“For a few days now we have been in the security belts around Herat,” police officer Nazir Ahmad told Radio Azadi on July 31. “We have no bread, no water, and no rest. We fight the enemy day and night without bread and water.”

In Lashkar Gah, the capital of the southern province of Helmand, heavy fighting was also reported on July 31 between Afghan security forces and Taliban militants who entered parts of the city two days earlier.

But Mohammad Din Narewal, the owner of the 20-bed Afghan Ariana Specialty Hospital, told the Associated Press that the Afghan Air Force had erroneously bombed the building — killing one person and wounding three.

“There were no Taliban in the hospital,” Narewal said. “I was told there had been a mistake because they had been given the wrong information that the Taliban were inside the hospital.”

Akhundzada also expressed fears about the ongoing conflict in populated parts of the city, saying “many civilians have been trapped inside the war zone.”

This story is based on reporting by RFE/RL’s Radio Azadi correspondents on the ground in Afghanistan. Their names are being withheld for their protection.